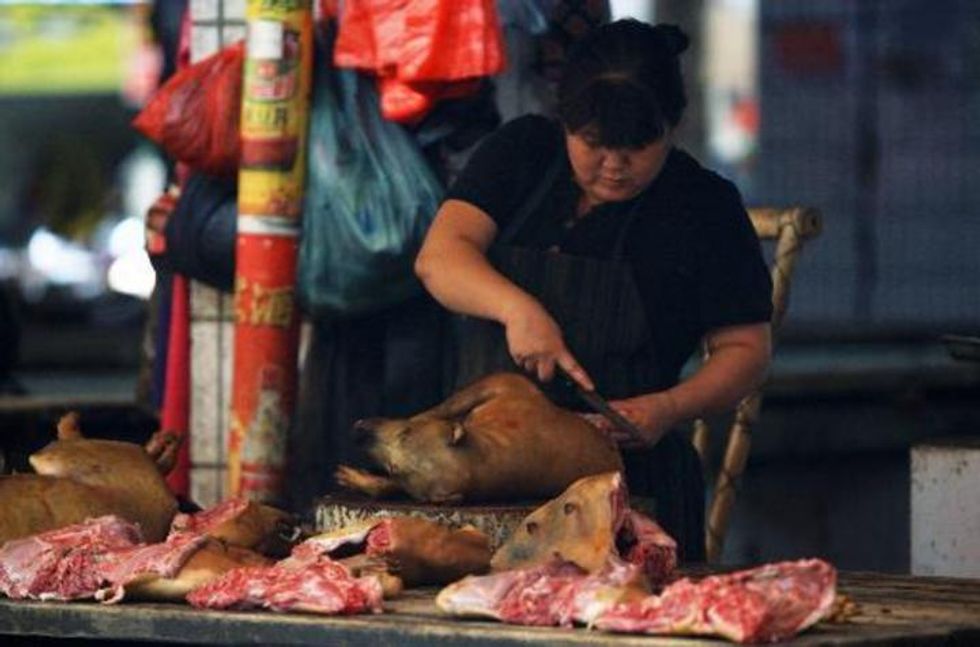 Beijing (AFP) - Animal lovers provoked an angry backlash from residents of a Chinese city after protesting a controversial festival Saturday in which locals celebrate the summer solstice by eating dog meat, witnesses and media said.

Activists have flocked for weeks to Yulin, in the southwestern region of Guangxi, to protest the local custom of eating dog -- particularly on the summer solstice, which fell Saturday, in an event dubbed the "dog meat festival".

But their efforts have backfired. "A lot of people have said, 'I don't eat dog meat, but just because of these idiots, I will go buy dog meat to eat and to give to my friends to eat," a 50-year-old animal rights advocate visiting Yulin told AFP by phone.

The activist, who asked not to be named due to sensitivities around the issue, added that outside criticism had "created a sense of confrontation".

"These outsiders coming in as dog lovers are just troublemakers coming to Yulin to create unrest," he cited locals as saying.

Yulin residents traditionally buy live dogs on the morning of the solstice, then gather for dinner to eat the dog meat, the activist, from the southern city of Shenzhen, said.

He said he had seen a few dozen other activists show up in Yulin to discourage the practice, sometimes by handing out fliers and holding banners.

Despite their efforts, however, early Saturday more vendors than normal could be seen selling dog meat, and deliveries came in mini-buses rather than by motorbike as usual, only to disappear quickly, local media reported.

"The vendors were way too busy, virtually all of them had staffed an extra cashier," the Legal Evening News said.

Local vendors contacted by AFP denied even being open for business on Saturday, however, perhaps reflecting controversy around the issue.

Activists had prepared to hoist signs outside the city government office in the morning -- but the protest never materialised, the Legal Evening News said.

Chinese authorities clamp down on any form of dissent that might lead to "social unrest".

A day earlier, dog sellers had goaded activists by holding up their animals and urging animal lovers to buy -- and rescue -- them, the Southern Metropolis Daily reported on Saturday.

It also cited residents as saying: "I didn't eat dog meat before, but after they yelled at Yuliners the way they have, this year I will definitely celebrate the dog meat festival."

Wang Xiaoyuan, a 35-year-old from the northern city of Taiyuan who travelled with 12 people, told AFP people had followed her group and warned them not to return.

Yulin authorities have declined to step in, saying eating dog is not illegal -- but have suggested restaurants serving such dishes cover the word "dog" on signs, the official Xinhua news agency previously reported.