Warm-blooded or cold? Scientists say dinosaurs were somewhere in between 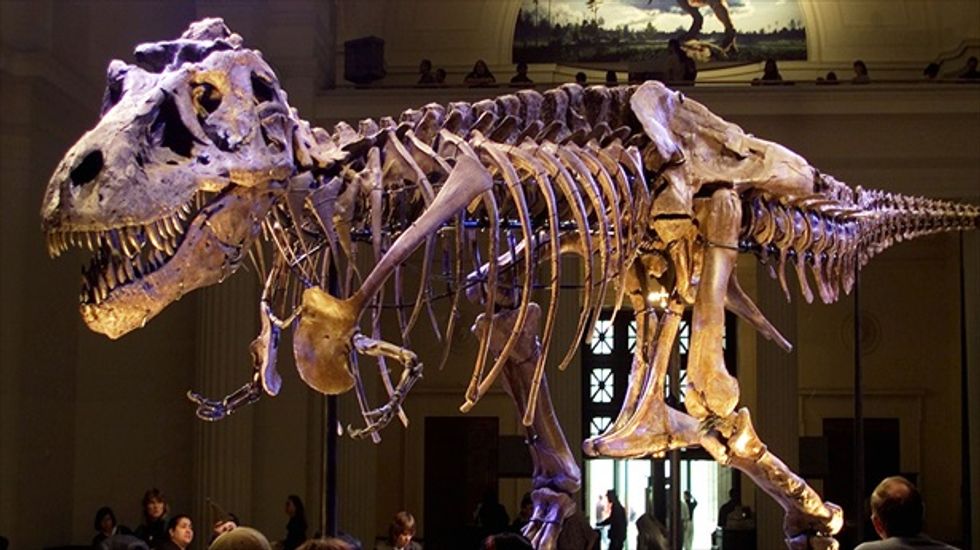 WASHINGTON (Reuters) - The hot question of whether dinosaurs were warm-blooded like birds and mammals or cold blooded like reptiles, fish and amphibians finally has a good answer.

Dinosaurs, for eons Earth's dominant land animals until being wiped out by an asteroid 65 million years ago, were in fact somewhere in between.

Scientists said on Thursday they evaluated the metabolism of numerous dinosaurs using a formula based on their body mass as revealed by the bulk of their thigh bones and their growth rates as shown by growth rings in fossil bones akin to those in trees.

The study, published in the journal Science, assessed 21 species of dinosaurs including super predators Tyrannosaurus and Allosaurus, long-necked Apatosaurus, duckbilled Tenontosaurus and bird-like Troodon as well as a range of mammals, birds, bony fish, sharks, lizards, snakes and crocodiles.

"Our results showed that dinosaurs had growth and metabolic rates that were actually not characteristic of warm-blooded or even cold-blooded organisms. They did not act like mammals or birds nor did they act like reptiles or fish," said University of Arizona evolutionary biologist and ecologist Brian Enquist.

"Instead, they had growth rates and metabolisms intermediate to warm-blooded and cold-blooded organisms of today. In short, they had physiologies that are not common in today's world."

There has been a long-standing debate about whether dinosaurs were slow, lumbering cold-blooded animals - as scientists first proposed in the 19th century - or had a uniquely advanced, more warm-blooded physiology.

As scientists unearthed remains of more and more fast-looking dinosaurs like Velociraptor, some championed the idea dinosaurs were as active and warm–blooded as mammals and birds. The realization that birds arose from small feathered dinosaurs seemed to support that view.

University of New Mexico biologist John Grady said the idea that creatures must be either warm-blooded or cold-blooded is too simplistic when looking over the vast expanse of time. Like dinosaurs, some animals alive today like the great white shark, leatherback sea turtle and tuna do not fit easily into either category, Grady added.

"A better answer would be 'in the middle.' By examining animal growth and rates of energy use, we were able to reconstruct a metabolic continuum, and place dinosaurs along that continuum. Somewhat surprisingly, dinosaurs fell right in the middle," Grady said.

The researchers called creatures with this medium-powered metabolism mesotherms, as contrasted to ectotherms (cold–blooded animals with low metabolic rates that do not produce much heat and bask in the sun to warm up) and endotherms (warm–blooded animals that use heat from metabolic reactions to maintain a high, stable body temperature).

Grady said an intermediate metabolism may have allowed dinosaurs to get much bigger than any mammal ever could. Warm–blooded animals need to eat a lot so they are frequently hunting or munching on plants. "It is doubtful that a lion the size of T. rex could eat enough to survive," Grady said.

(Reporting by Will Dunham; Editing by Marguerita Choy)

[Image: The dinosaur named "Sue," a 41-foot-long Tyrannosaurus rex, is shown on display at the Field Museum in Chicago, Illinois in this May 17, 2000 file photo. REUTERS/Sue Ogrocki/Files]