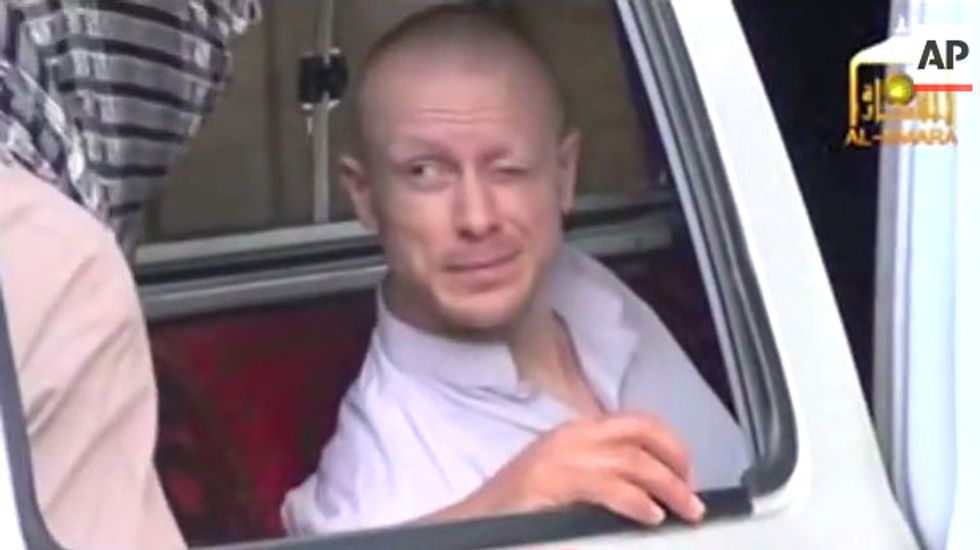 The Taliban released Wednesday footage of the dramatic moments when a cadre of gun-toting militants handed over army sergeant Bowe Bergdahl to US forces after five years in captivity.

"Don't return to Afghanistan again. Next time, nobody will release you," one of the insurgents is heard telling Bergdahl in the 17-minute video.

It shows a US military helicopter landing in a valley, kicking up small clouds of dust as a jittery-looking Bergdahl waits just a few feet away flanked by militants clutching a white flag.

After a brief exchange of handshakes between insurgents and US soldiers, Bergdahl -- wearing a white salwar kameez and a scarf over his shoulders -- moves unsteadily towards the helicopter. The entire exchange lasts about one minute.

Bergdahl -- the only US soldier held by the Taliban after being captured in Afghanistan -- was freed on Saturday in exchange for five senior Taliban militants detained at Guantanamo Bay in a deal brokered by Qatar.

His release has evoked sharp criticism from some US politicians, who fear they could return to the battlefield and pose a threat to Americans abroad.

It has also provoked revulsion among Afghans in those parts of the country traditionally opposed to the Islamists.

The Taliban video, entitled "Ceremony of the American soldier exchange", at one point also displays the words "Don't Come Back to Afghanistan" superimposed over footage of Bergdahl.

A male voiceover in the video -- laced with emotive religious music and chants of "Allahu Akbar" (God is greatest) -- said the exchange occurred in the eastern Afghan province of Khost.

"The Americans contacted us and asked us where was a good place to meet. We contacted tribal elders to come and join us, because we do not trust them (Americans)," the voiceover said.

"I congratulate all the mujahideen for this victory."

In response to the video, US Pentagon press secretary John Kirby said: "We have no reason to doubt the video's authenticity, but we are reviewing it."

"Regardless, we know the transfer was peaceful and successful, and our focus remains on getting Sgt. Bergdahl the care he needs," Kirby said in a statement.

Bergdahl is now being treated at a US military facility in Germany.

The authenticity of the video emailed to media organisations by Taliban spokesman Zabiullah Mujahid could not be independently verified by AFP.

But the video is characteristic of a well-oiled Taliban propaganda machine, observers say.

Once seen as uneducated thugs, the Taliban -- ousted from power in the US-led invasion of Afghanistan in 2001 -- have evolved into a media-savvy force adept at exploiting the power of mass communication.

"In addition to showing the scene of handover, the video presents a 'victory' narrative of the Taliban," said Borhan Osman, an analyst at the Kabul-based think-tank Afghan Analysts Network (AAN).

"It frequently shows the scenes of the five leaders exchanged for Bowe while arriving in Qatar. The scenes of the men receiving a hero's welcome... would stir up excitement and boost the morale of the fighters and supporters of the movement."

US defence officials have previously said dozens of US special forces troops backed up by helicopters were sent for the handover.

"Fortunately, no shots were fired," Defense Secretary Chuck Hagel said Sunday. "There was no violence. It went as well as we not only had expected and planned, but I think as well as it could have."

The US military's top officer General Martin Dempsey said Tuesday that Bergdahl may be disciplined if the army holds him guilty of misconduct, after claims from members of his unit that he had been captured in 2009 after abandoning his post.