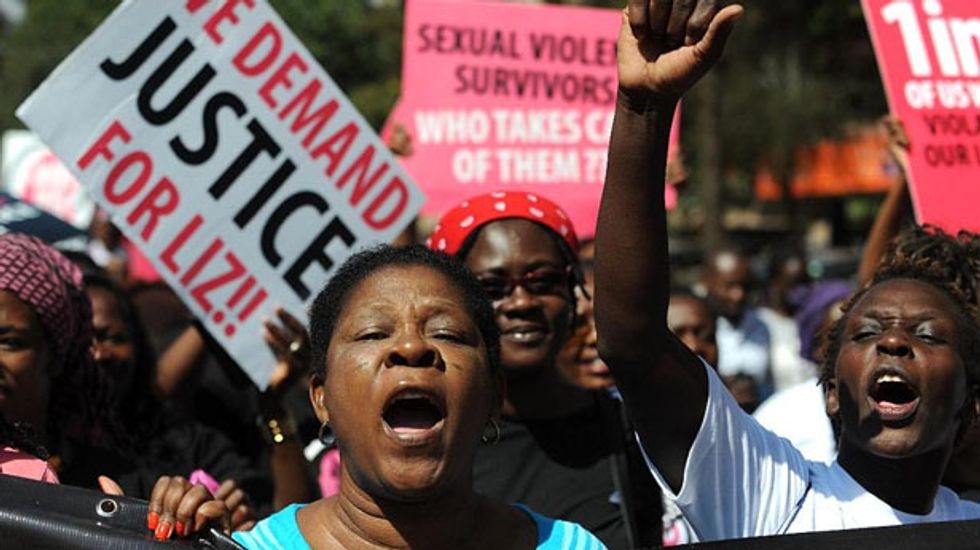 Hundreds of protesters marched through a Kenyan town Monday demanding justice for a schoolgirl who was brutally gang raped, ahead of the trial of suspects who were originally punished by being made to cut grass.

"We have come out to demand justice for our girls," said Jennifer Lucheli, 45, mother of five, as she marched through the streets of the western Kenyan town, near the border with Uganda.

The protest comes a day ahead of the opening of a trial of at least one of those accused of carrying out the attack.

The 16-year-old victim, known by the pseudonym Liz, was reportedly attacked, beaten and then raped by six men as she returned from her grandfather's funeral in western Kenya in June 2013.

The gang dumped her, bleeding and unconscious, in a deep sewage ditch.

She suffered a broken back, caused either by the beating or by being hurled down into the pit, as well as serious internal injuries from the rape.

The case made global headlines after it emerged that three of the alleged rapists whom Liz identified were ordered by police to cut grass around the police station as punishment.

Police chief David Kimaiyo later cast doubt on Liz's testimony, saying in November that the time between her screams for help and villagers coming to her rescue was "too short for six assailants to have gang raped her".

But the public prosecutor then ordered the suspects to be charged with gang rape.

"Rape has been so rampant in this area that we can't sit back, we need to stop the appalling criminal act," said Joy Musumba, 25, holding a placard that read "slashing grass is not punishment for rape."

Business at the usually busy border town came to a standstill as residents and traders were caught by surprise by the protest, with men on motorbike taxis joining the march, honking horns as they drove alongside.

"We demand justice for Liz," placards carried by the protestors read. "Liz is just like me," another sign read.