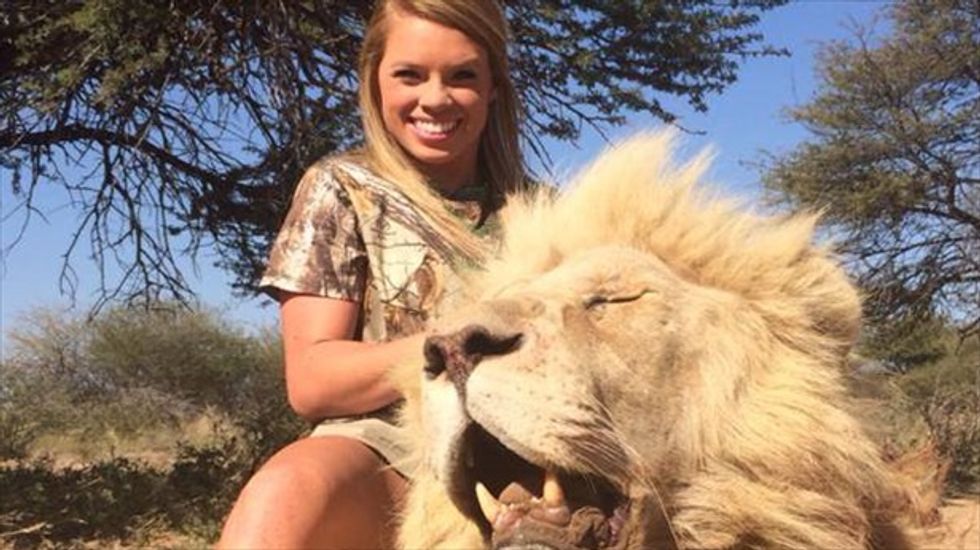 A 19-year-old Texas woman has deleted online photos of herself with endangered animals she hunted and killed following increasing criticism, the Dallas Morning News reported on Wednesday.

Kendall Jones garnered attention from several outlets regarding her Facebook page, which featured images taken from several of her hunting trips to Zimbabwe and South Africa, where she has killed elephants, hippos, leopards, zebras and other animals. In one picture, Jones is seeing holding the head of a dead lion toward the camera.

Jones, a cheerleader at Texas Tech University who has hunted since she was 9 years old, has also signed a development deal with the Sportsman Network, which also features former Alaska Gov. Sarah Palin (R).

"Many of the species that Ms. Jones has killed face declining populations due to loss of habitat and poaching," vice president for wildlife protection Nicole Paquette said in the statement. "Amidst this crisis, trophy hunting only adds to the threats to the survival of these iconic species and is nothing more than a thrill kill."

"There are many parts of Zimbabwe where there in an abundant population of leopard that wreak havoc on the livestock of the farmers in the village," Jones said in an email sent from another hunting trip to Africa. "Instead of the villagers killing the leopards to prevent livestock damage, permits are sold to hunters to do this for them."

She also said that she has received death threats and online bullying after her hunts gained more exposure.

"I knew when I posted these pictures that there would be people for and against my Facebook page," Jones said. "I really am shocked at how rude many people are by name calling and swearing."

At the same time, an online petition calling for her to be banned from hunting in Africa has amassed more than 60,000 signatures.

"She has publicly stated that she hopes to have a television hunting show and she is using endangered and helpless African animals as a stepping to further her popularity on social media platforms," the petition stated.