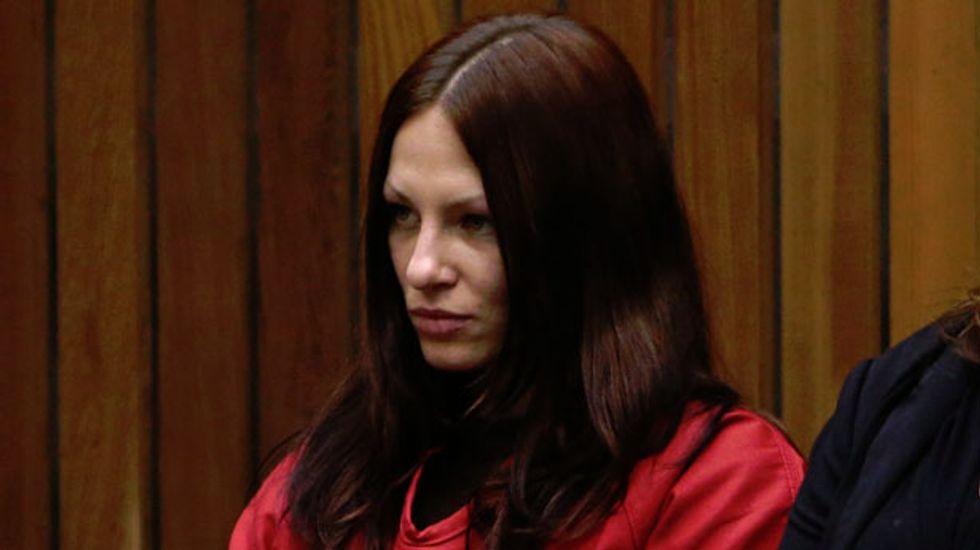 SANTA CRUZ Calif. (Reuters) - An accused prostitute charged with killing a Google executive by injecting him with a fatal dose of heroin on his yacht off the California coast pleaded not guilty on Wednesday and her attorney said she has been unfairly demonized in the case.

A grim-faced Alix Catherine Tichelman, 26, entered not guilty pleas to eight criminal counts including manslaughter, prostitution and heroin possession during a brief hearing in Santa Cruz Superior Court and was ordered back to court on Oct. 20.

Wearing red jail garb, her reddish-brown hair falling over her face, she spoke only in response to questions from Judge Timothy Volkmann as her parents sat quietly in the front row of the courtroom.

Volkmann rejected a request by Tichelman's lawyers to lower her $1.5 million bail, saying that he was not impressed by her ties to the community and that she faced serious charges.

Prosecutors say Tichelman, a high-priced call girl, injected 51-year-old Forrest Hayes with the drug during a tryst aboard his yacht off Santa Cruz in November, then made no effort to help him after he fell unconscious - instead stepping over the technology executive's body to finish her glass of wine.

Outside court, Larry Biggam, a Santa Cruz County public defender, told reporters the defense was not contesting that Tichelman was a prostitute but that she was a "wounded bird" herself who should not be blamed for Hayes' death.

"There was no intent to harm and injure, much less kill, Mr. Hayes," Biggam said. "Why would she? He was a lucrative source of income for her."

Biggam said his client and Hayes were engaged in "consensual drug use" at the time of his death and that "to demonize and sensationalize Alix Tichelman is unfair."

Tichelman was arrested earlier this month after being contacted by a police officer posing as a potential client and agreeing to a price in excess of $1,000 authorities have said.

Hayes and Tichelman allegedly met on the dating website SeekingArrangement.com, which calls itself "the leading network for Sugar Daddy and Sugar Baby relationships across the globe." A spokeswoman for the website has said it prohibits solicitations for prostitution.

According to local media reports, police in Milton, Georgia, are investigating Tichelman in connection with the death of Dean Riopelle, 53, of a heroin overdose in September 2013. She has not been charged in that case.

(Reporting by Mary Papenfuss; Writing by Dan Whitcomb; Editing by Will Dunham)