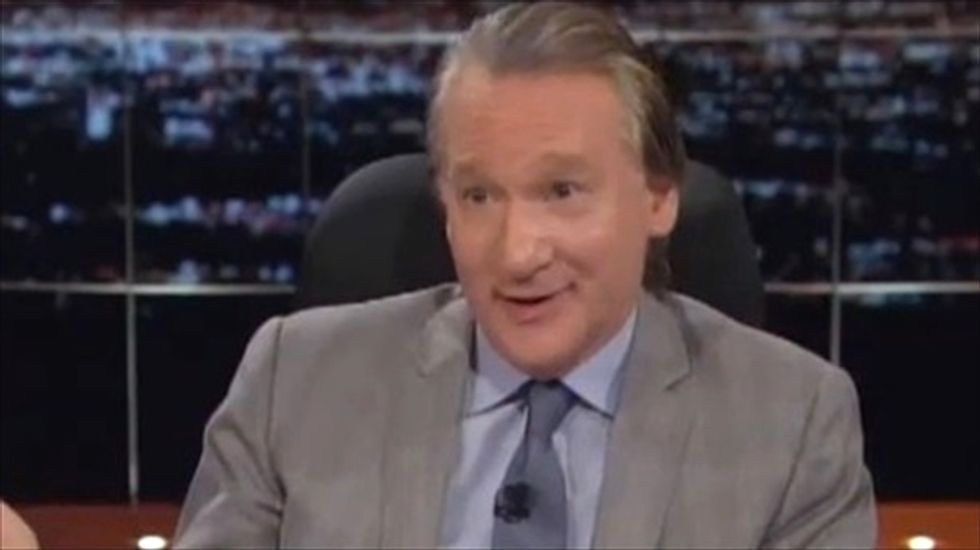 "This is the massive expansion of government power that you numbskulls in the Tea Party should be freaking out about," Maher said. "You're always screaming about the loss of liberty, and how tyranny is coming. Yeah, it's coming right through the door with a battering ram, no warrant, and a stun grenade. Or to put it in a way you can understand, I'm scared of the cops, and I'm white."

Despite the country's violent crime rate being at a 40-year low, Maher said, local police, including those in small towns, have been snapping up surplus military equipment and treating them like new toys.

"I bought a glue gun once, and by the end of the weekend my dog's face was stuck to the toilet rim," Maher said. "But in West Springfield, Massachusetts, the police department's new toy is two grenade launchers. Why? In case Boko Haram takes Connecticut? It's hard enough keeping the George Zimmermans out of the police academy without including bazookas in the brochure."

While acknowledging that police face new kinds of threats on a day-to-day basis these days -- "when I was a kid, there was no such thing as Shia LaBeouf," he quipped -- the deployment of SWAT teams, which used to happen a few thousand times a year, now seemed to be happening 1,000 times a week.

"Once you start dressing and equipping people like an occupying army, they start acting like one," he said.

Every day, Maher said, stories come to light of another incident involving excessive force. Specifically, he mentioned the footage of an unidentified California Highway Patrol officer beating 51-year-old Marlene Pinnock, a homeless woman, for allegedly trying to walk onto a Los Angeles freeway.

"Even worse, that's their training video," Maher said, drawing groans from the crowd. "This guy has been demoted to desk duty while officials conduct a review, but what's to review? He's punching an old lady in the face."