Breathe deeply, it is safe to go on a plane, travellers told 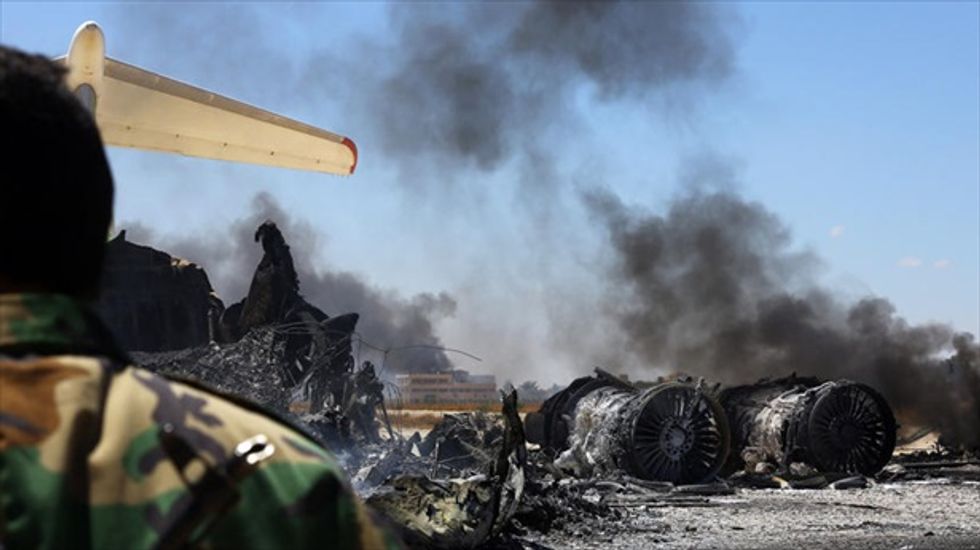 The remains of a burnt airplane seen at the Tripoli International Airport in Libya on July 16, 2014 [AFP]

After three major air disasters in one week, with planes coming down in Ukraine, Taiwan and then Mali without a single survivor, passengers can be forgiven for feeling a little pang of panic boarding their flights.

Waiting to check in at Paris's Charles De Gaulle airport on Friday, Thai athlete Thapanat Rueangmanee, 25, admitted to being "a little bit nervous, like most of my friends".

She had come to the French capital for an athletics meetings, and she had no other choice but to fly home. "We can't take the boat," she said.

"Three crashes in one week, that's quite a lot," said Hadjera Akli, 24, who had come to meet her family from Algeria. "But it is just a convergence of circumstances, isn't it?" she said, not entirely convinced.

But on Internet forums people are not quite so calm -- fear of flying is rampant.

Yoco, who is flying to Seoul in August, was "rather zen" until now, but she confessed on the French site crash-aerien.aero that with the latest accidents "the panic has returned".

"So there's another confirmation of a plane crash? I'm flying to Chicago tomorrow from Atlanta. Not sure if I can make it," wrote a passenger on fearofflying.com. "I've done all my 'exercises' but this is putting me over the top... Help!"

"My hands are shaking so much right now it's hard to type," another person admitted on the same forum. "This is four incidents on commercial aircraft in six months -- one still missing, one shot down, one crash in bad weather, and now this one. Three this week alone!"

Even Tony Tyler, the director of the International Air Transport Association (IATA), was forced to admit on Friday that "after three tragedies in so short a period, a lot of people are questioning air safety.

"But despite what has happened over the last seven days, we can take the plane in safety," he insisted.

Every time a plane crashes the phones at the French Centre for the Treatment of the Fear of Flying start ringing.

"Our former clients ring us because they are anxious, and they have questions they want answered," said Xavier Tytelman, the centre's president and a former air force pilot. "We try to give them explanations, to help them get a little distance on what has happened."

Several hundred people a year pass through the centre, which opened seven years ago. Each course of treatment costs 430 euros ($580), which is often paid by their employers. Fear of flying can be "a real brake on professional advancement", Tytelman added.

"Some people even quit their jobs because they have to fly for work. Others make their families suffer, and people who emigrate sometimes are too scared to return home for years," he said.

"We have to chip away at all the things they have seen in the media and in films," Tytelman said.

"We have had a series of accidents in which no one has survived, but in general the survival rate when an airliner goes down is 50 percent, while for a car going at 40km/h (25mph), there is an 80 percent chance of death," he added.

At Charles De Gaulle airport, Parisian student Gabriel Dulbecco is keeping his cool before his flight to China: "It's true, you could become paranoid. But at the same time there are thousands of flights every day now without problems."

Others are more fatalistic, like Zohra, a 52-year-old Algerian. "We have to put our faith in God," she said. "If a plane crashes, it crashes."