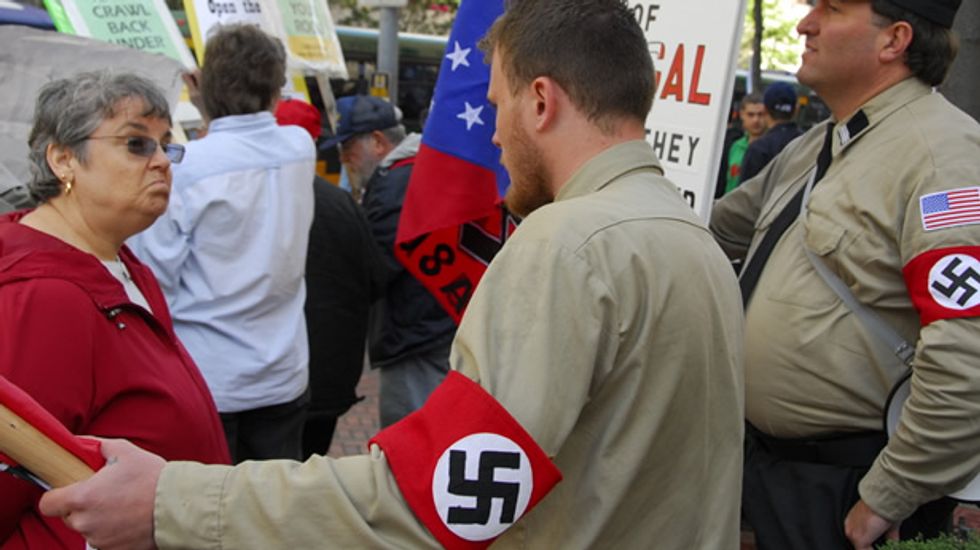 Nazis At May Day March, Seattle on shutterstock

The California owner of an anti-Semitic website registered in the United States, but written in Hungary, fled to Canada after the Federal Bureau of Investigations issued a warrant for his arrest this week.

Béla Varga, owner of the kuruc.info domain, is charged with having threatened the life of lawyers who subpoenaed him regarding the hate site. The name of the domain, "kuruc," has nativist roots, referring to a patriotic nationalist Hungarian movement that opposed the foreign reign of the Hapsburg Dynasty. Its English-language "About Us" page describes it as "a patriotic Hungarian conservative, right-wing nationalist, fact-finding news site."

Varga allegedly worked at Claar Cellars, "a medium-size Premium winery in the Columbia Valley, as well as Chateau Soverain. According to Patch.com, "Varga said he came to the U.S. in 1988, picking Healdsburg as home because he wanted to establish himself as a winemaker." However, the exact nature of his employment -- as well the degree that qualified him to work at these wineries -- has recently come into question.

As for the domain he acknowledged owning, a Budapest organization that monitors European extremism characterized kuruc.info as "the most active hate group operating in Hungary," adding that it regularly publishes information about Jewish people that "qualifies as hate speech and [glorifies] fascist ideas."

It regularly targets those it refers to as Zionists, Israelis, Gypsies, and criminal immigrant elements, and frequently complains about the "so-called Hungarian Holocaust Museum, which was involved in massive embezzlement of millions of Hungarian taxpayers’ dollars." The site also publishes material in which the gas chambers used to murder thousands of Jews are claimed to be "air defense shelters."

Varga has never denied his connection to the site, choosing instead to qualify it. He told Patch.com that "I helped them out in 2008 when the government closed them down," but denied any further involvement.

However, The Jerusalem Post discovered that $340 of the $450 of reward money for information about protestors outside of the trial of a suspected Nazi war criminal was provided by Varga.

It was "offered by our Comrade Bela Varga who lives in America," the piece on kuruc.info read, before wishing potential beneficiaries "good hunting." The Nazi war criminal in question was Laszlo Csatary, who allegedly sent 15,700 Jews to their deaths in Auschwitz and had been the number one target of the Simon Wiesenthal Center's list of Nazi war criminals at large.

Varga was arrested in May, but posted his $250,000 bail. The warrant for his arrest was issued after he failed to appear at two subsequent hearings.

A user by the name of "Varga Béla" commented on an article about the case against Béla Varga, writing that "[i]f they want to pursue this ridiculous case, they would need to apply to the Canadian government for my extradition. Which is highly unlikely to be successful [because] Canada has no extradition treaty in this regard to the US."