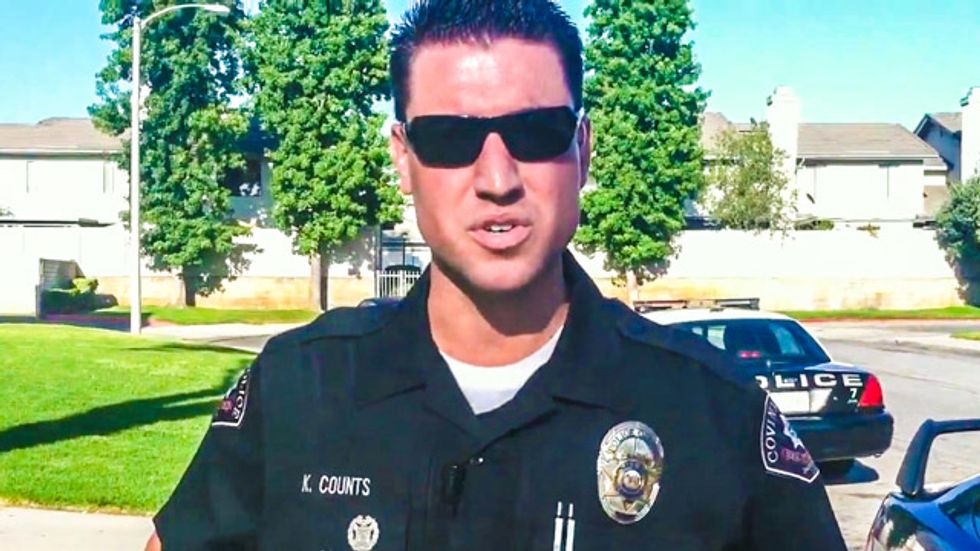 A California man said that police in Covina arrested him for standing on a public sidewalk and filming what they called "private cars."

YouTube user "Damon Enz" explains in a video posted on Tuesday that he was "harassed by the Covina police department for filming on a public sidewalk."

The video, which was reportedly recorded on June 30, begins with an officer walking toward Enz, and asking him what he was videotaping.

"I'm on a public sidewalk, sir," Enz informs the officer.

The officer, whose name tag identifies him as "K. Counts," explains that he has additional police powers because officers were conducting a criminal investigation in the area. After the officer demands identification, Enz says he doesn't have any, but gives him his first name.

"I am conducting a criminal investigation and you are videotaping cars that are involved in that investigation, and I need to know who you are because someone that I am looking for is still outstanding," Counts says with his hand on his gun.

Honestly, I'm going to detain you if you don't answer my questions because I'm conducting a criminal investigation!" the officer exclaims. "I have lawful authority to detain you."

The officer then pats down Enz, and apparently tosses his video recording devices into the grass.

After several minutes, Enz's mother comes out and picks up the camera just in time to film him being handcuffed.

"You are obstructing my investigation, you are under arrest," Counts insists.

"I was also charged for obstruction and false I.D. even though his job wasnt being obstructed and i provided him with my true name even tho i didnt half to!!!" Enz wrote in the YouTube description. "The charges were dropped so the department can cover up their corruption!!"

The Photography Is Not A Crime blog asserted that Counts had charged Enz just for the purpose of shutting down the video recording, even though he knew the charges would not stick.