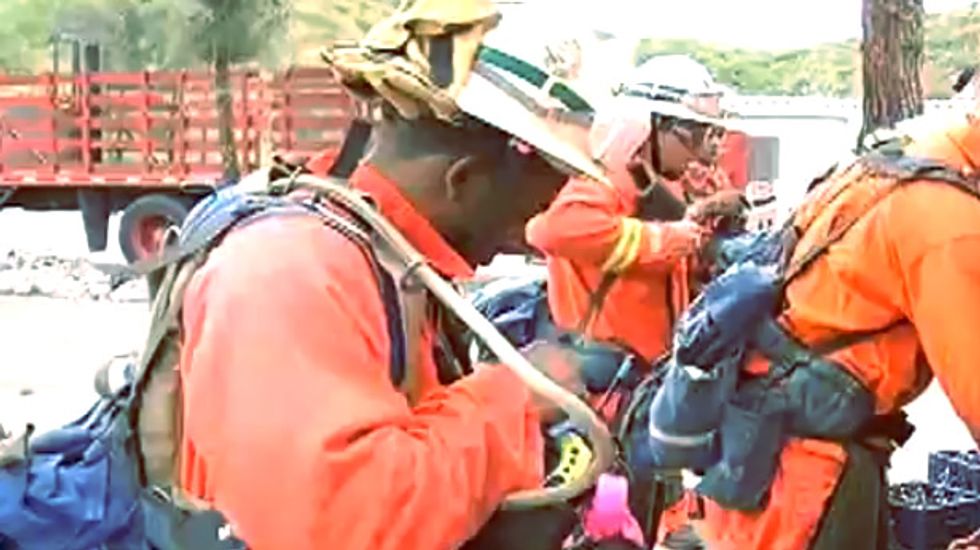 KQED is reporting that nearly half of the firefighters battling the Bully Fire blaze in Shasta County, California are inmates from the California Department of Corrections and Rehabilitation (CDCR).

The CDCR created a Conservation Camp program in order "to provide the cooperative agencies with an able-bodied, trained work force for fire suppression and other emergencies such as floods and earthquakes."

According to KQED, inmates who battle these fires are "low-level offenders," and make less than $2 per day protecting California from conflagrations. The labor of these 4,000 "able-bodied" men saves the state more than $100 million in firefighting costs by providing upwards of 3 million person-hours of service.

One of the inmates KQED spoke to, Emir Dunn, said that "the first day we was out here, it was like 111 or 115, and that's not including the fire." He was dressed in full firefighting gear that weighs over 100 pounds, and will remain in the field for 24 hours.

Every inmate crew of 16 is overseen by a professional firefighter. In Dunn's case, that task falls to Captain Josh Kitchens, who told KQED that his men "are some workhorses. When it's time to do some grunt labor, that's what we're good at. Get a lot of stuff done with 16 bodies."

Officials with the CDCR say they have no "hard numbers" about the recidivism rate of inmates who participate in the program, but noted that between three and five percent of participating inmates later get jobs with CAL FIRE or the Forest Service.

While there have been very few escape attempts, the Christian Science Monitor noted that critics of the program point out that the problem isn't that the state is using potentially dangerous prison labor -- but that the inmates are taking the place of qualified citizens who would have to be paid between $10 and $12 per hour to perform the same work.

Watch a report on the CDCR Inmate Fire Crews via YouTube below.