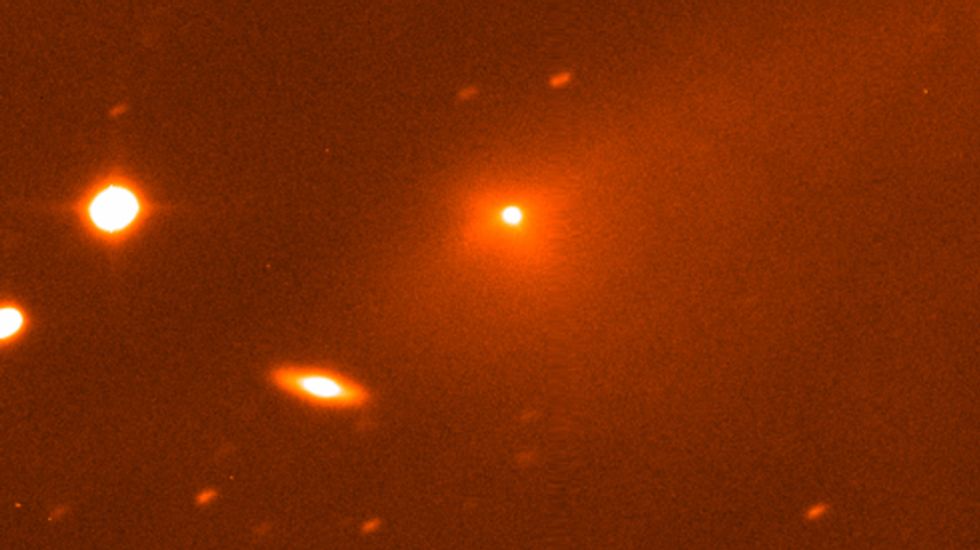 Several hundred million miles from home, one of the most ambitious space missions ever attempted is closing in on its target: Comet 67P/Churyumov-Gerasimenko, a massive ball of ice, dust and organic materials that orbits the Sun every six-and-a-half years.

The probe Rosetta – built for €1bn by the European Space Agency (Esa) – will reach its target on 6 August after a 10-year journey across the solar system. For the next year, it will hover a few dozen miles above Comet 67P as its sweeps around the Sun while its instruments analyse the dust and water vapour that will start to pour from the surface of the comet as it nears the Sun and heats up.

For the first time, scientists will have a close-up view of a comet – one of astronomy's most beautiful objects – as filaments of dust stream into space from its surface and form a glowing tail that will arc behind it. More importantly, Rosetta's scrutiny of comet 67P should answer several key scientific questions. Did comets bring water to Earth and form our oceans? Did they seed our world with organic chemicals that are the building blocks of life?

"These are some of the key issues that Rosetta has been built to answer," said mission scientist Matt Taylor. "The probe has taken 20 years to design, construct and launch and has involved hundreds of scientists and engineers. Now we are only a few days away from our target and stress levels are rising – so it really helps we can now see Comet 67P as a real object, not just a theoretical concept dreamed up by astronomers."

Launched in February 2004, Rosetta – which is carrying a smaller lander craft called Philae – has since circled the Sun in a series of complex loops that have included three close fly-bys of Earth and one of Mars. This trajectory took the spaceship into deep space before it arced back on a path that tracked behind Comet 67P as it swept sunwards.

In January, Rosetta was several million miles from its target. Since then, burns of its main thruster engines – including an eight-hour burst in May – have brought it to within 5,000 miles. Three more burns this month will bring the probe to within just a few dozen miles of 67P.

In the process, our vision of comets should be transformed. At present 67P – according to a photograph that was taken by Rosetta – appears to be a comet of two halves, a duck-shaped object that has a distinct head-like portion connected by a thin neck of material to a larger body-like section.

"It may be an object we call a contact binary which was created when two smaller comets merged after a low-velocity collision," said Taylor.

Such impacts are thought to have been common when the Sun's planets were forming billions of years ago and small blocks of rocky and icy debris peppered the solar system. However, there are other explanations for 67P's odd shape. It may once have been a single spherical object that has since lost a great deal of its volatile material following multiple encounters with the Sun, for example. "When we get closer, we should find the answer," Taylor said.

Once Rosetta reaches 67P, it will begin a series of complex manoeuvres in order to carry out a detailed survey of the comet's surface and so help Esa's controllers select a shortlist of five candidate landing sites for its companion probe.

After the best site has been picked, Philae will then be dropped on to 67P, probably in November. It will be a tricky manoeuvre: Comet 67P is only 2.5 miles in diameter and its gravitational field is too small to hold on to Philae. As a result, the little lander will have to harpoon itself to the comet's surface to stay in place.

Philae will then carry out a set of experiments that will include counting numbers of atoms of hydrogen and its isotope deuterium in the comet's ice. If it is found that the ratio of hydrogen and deuterium on 67P is the same as that found in the water of Earth's oceans, this will provide strong support for the idea that water was delivered to our planet by comets. Scientists back this idea because they argue that Earth would have been so hot during its formation that all water would have been driven off its surface, leaving it hot and arid.

At the same time, mass spectrometers on Philae and on Rosetta will study the comet's gases and dust for signs of amino acids. An amino acid has already been detected on another comet and they are considered to be of critical importance because they act as the building blocks of proteins in living organisms.

Comets crashing on Earth may therefore have brought not just water, they may also have brought organics that could have influenced the appearance of life here.

"Comets are leftovers from the formation of the solar system," added Taylor. "They are time capsules, and by studying one in detail – for the first time in history – we are going to learn a great deal indeed."

Trump is creating a 'crisis' for the Republican Party: analyst

Reacting to reports that Donald Trump is thinking of moving up his announcement that he will be running for president in 2024, political analyst and pollster Fernand Amandi said the threat of the former president jumping into the race at such an early time is creating problems for the Republican Party.

Appearing on MSNBC's "The Katie Phang Show," Amandi explained that Trump has three main reasons for wanting to make the jump sooner than later -- two of which are designed to ensure his political survival.

Liz Cheney is one of the few Republicans to condemn the attempted coup on January 6 and to join Democrats in the investigation. Standing against an armed insurrection is a bizarrely low bar, but Cheney deserves a little credit for being one of two to meet it.

That’s where the credit should stop, though.