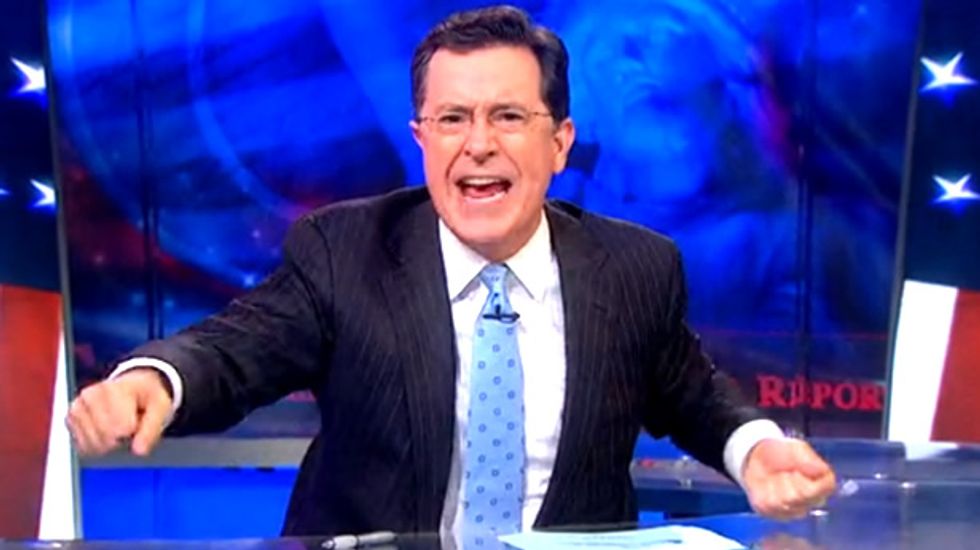 "I don't mean to sound like a broken MP3 file," Colbert began, "but Barack Obama doesn't have the right stuff to be president -- and I'm beginning to think that he agrees."

Colbert then cut to a clip of Fox News' Greta Van Susteren saying that "this week, President Obama refused to go to the Mexican border -- but guess where the president is going? On vacation."

"Yes," Colbert said, "while America burns, President Nero is fiddling on vacation. In Martha's Vineyard, shooting pool in Colorado, and down in Disneyworld, he's just hanging around giving the same damn speech all day," he said while cutting to a clip of the animatronic version of Obama in Disneyworld's Hall of Presidents.

"And you won't believe what he did on his latest trip to Europe," Colbert continued, tossing the segment to Fox News' Peter Johnson Jr., who was complaining about "the salon society of the 17th and 18th Century -- of the Enlightenment -- has now come to President Obama."

"We know that as soon as he stepped off the plane in Rome," Johnson Jr. said, "he's asked the ambassador, 'let's have a dinner party.' They discussed art, architecture -- the Englightenment! Wonderful!"

"Yes, wonderful!" Colbert chimed in. "The Enlightenment! The 17th and 18th Century movement that believed that knowledge was worth acquiring and that the scientific method is superior to superstition and witchcraft!"

"Garçon!" he said, signalling to an imaginary waiter. "Please bring us pasteurized milk and vaccines so we can all live past age 30!"

Watch the entire July 15, 2014 episode of The Colbert Report via Hulu below.