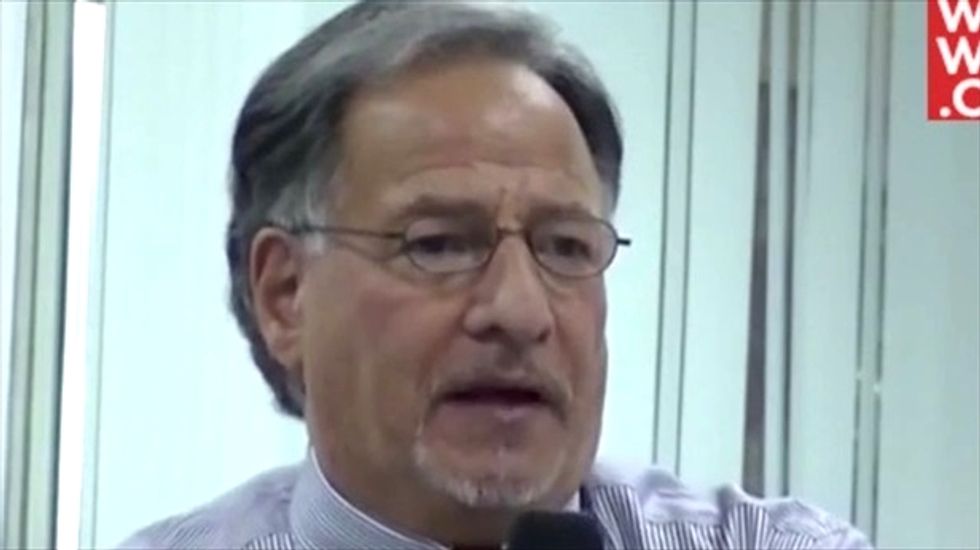 A senior analyst for the conservative Center for Immigration Studies (CIS) expressed support for the idea of not only impeaching President Barack Obama during a speech to a Florida Tea Party group, but also for his public execution, Right Wing Watch reported.

"We all know, if there ever was a president that deserved to be impeached, it's this guy, alright?" Stephen Steinlight told members of the Highlands Tea Party. "And I wouldn't stop. I would think being hung, drawn, and quartered is probably too good for him."

Imagine 2050, a blog belonging to the progressive Center for New Community, reported that Steinlight's 91-minute speech on July 17 was posted online three days later by John Nelson, who chairs the Highlands group. Nelson's organization also calls Steinlight "one of the nation's most insightful voices on immigration" in the video description.

During his speech, Steinlight alluded to a Gallup poll last month saying that 65 percent of respondents did not approve of Obama's handling of the nation's immigration policy. But he did not mention Gallup's analysis saying that, if the GOP does not "make a serious effort to create reform legislation, they could find themselves punished by Latino voters, who tilt Democratic, in 2016," regardless of the outcome of this year's midterm elections.

Instead, Steinlight criticized House Speaker John Boehner (R-OH), telling the audience he is "not a man to be trusted" and calling his threat to sue Obama -- which is actually connected to the Affordable Care Act and not immigration -- "a political loser."

Throughout the course of this year, CIS officials have seemingly supported the idea of deporting immigrants by pushing them out of cargo planes, and accused Obama of releasing "68,000 aliens with criminal convictions." Steinlight, specifically, has accused Latino immigrants of lacking "strong family values" and threatening to instigate the "unmaking of America."

Watch Steinlight's remarks, as posted by Right Wing Watch, below.