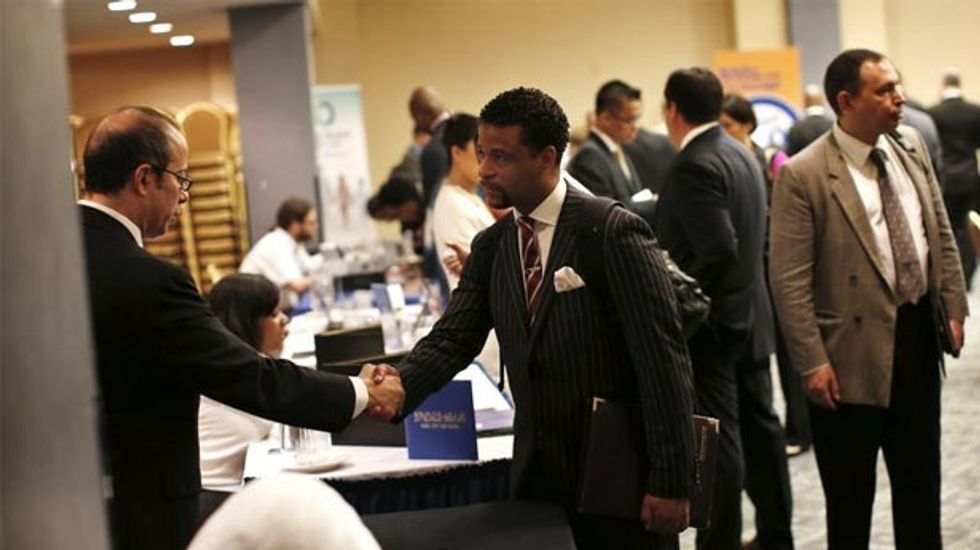 Other data on Thursday suggested a long-awaited acceleration in wage growth was imminent, with labor costs recording their largest increase in more than 5-1/2 years in the second quarter.

Initial claims for state unemployment benefits increased 23,000 to a seasonally adjusted 302,000 for the week ended July 26, the Labor Department said. Claims for the prior week were the lowest since May 2000.

"Unemployment claims have come down a lot as of late and suggest that labor market conditions continue to improve," said Yelena Shulyatyeva, an economist at BNP Paribas in New York.

The four-week average of claims, considered a better gauge of labor market trends as it irons out week-to-week volatility, fell 3,500 to 297,250, the lowest level since April 2006.

Summer automobile plant shutdowns for retooling cause volatility in claims around this time of the year as automakers sometimes keep assembly lines running. This throws off a model the government uses to adjust the data for seasonal variations.

In another report, the Labor Department said the Employment Cost Index, the broadest measure of labor costs, rose 0.7 percent. That was the largest gain since the third quarter of 2008 and followed a 0.3 percent increase in the first quarter.

It is one of Federal Reserve Chair Janet Yellen's favorite labor market gauges and is being closely watched for clues on the timing of the first interest rate increase from the U.S. central bank.

Growing anecdotal evidence of companies raising wages has left economists expecting the employment cost index to start rising significantly sometime in the second half of 2014.

Wages and salaries, which account for 70 percent of employment costs, increased 0.6 percent in the second quarter. That was the largest gain since the third quarter of 2008 and followed a 0.3 percent rise in the first quarter.

Despite the increase last week, claims remain at levels consistent with strong job growth. The data has no bearing on July's nonfarm payrolls as it falls outside the survey window.

The government is expected to report on Friday that payrolls increased by 233,000 in July, according to a Reuters survey of economists.

While that would be a deceleration from June's hefty gain of 288,000 jobs, it would mark the sixth straight month that employment has expanded by more than 200,000, a stretch last seen in 1997.