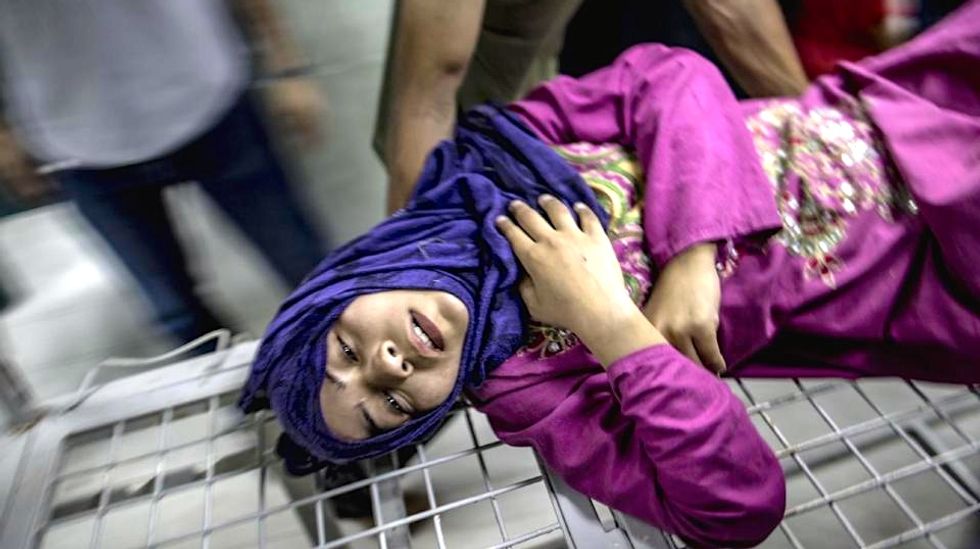 Israeli shells struck a UN school in Gaza early Wednesday, killing 16, as ground troops made a significant push into the territory despite Palestinian efforts to broker a 24-hour truce.

It was the second time in a week that a UN school sheltering hundreds of homeless Palestinians had been hit, with the latest violence pushing the Gaza death toll over 1,260.

The bloodshed came as a top-level Palestinian delegation including Hamas and Islamic Jihad leaders was preparing to head to Cairo to discuss a new proposal for a temporary humanitarian ceasefire, a top PLO official said.

But there was no word on whether Israel would respond to the initiative, with the military striking 75 targets in Gaza overnight as ground troops made a "significant advance" inside the narrow coastal enclave, army radio reported.

Violence in Gaza claimed at least 28 lives early Tuesday, with the worst strike taking place at the school in Jabaliya refugee camp in the north where hundreds had been seeking shelter after the army warned them to flee their homes.

So far, UN figures show more than 215,000 people have fled their homes in a territory which is home to 1.7 million Palestinians, leaving one in eight people homeless

Emergency services workers at the school were carrying out the grim task of picking body parts off the blood-soaked floor of a bombed-out classroom, an AFP correspondent said.

The outer wall of the complex had also been damaged and a number of dead animals including donkeys could be seen lying on the ground.

Those sheltering there quickly gathered their belongings and fled.

The army had been pounding the area with tank fire for an hour prior to the incident, the correspondent said.

The UN official gave a death toll of 16, while Gaza's emergency services spokesman put it at "dozens" after giving an initial count of 20.

The fresh violence came as the conflict between Israel and Hamas in Gaza entered its 23rd day, with a truce proving elusive despite flurries of international efforts to secure an end to hostilities.

US Secretary of State John Kerry said that Israeli Prime Minister Benjamin Netanyahu had asked for fresh help from Washington in trying to broker a ceasefire.

"Last night we talked, and the prime minister talked to me about an idea and a possibility of a ceasefire," Kerry said on Tuesday.

Netanyahu had said he "would embrace a ceasefire that permits Israel to protect itself against the tunnels and obviously not be disadvantaged for the great sacrifice they have made thus far."

At the same time, Palestinian factions were reportedly heading to Cairo on Wednesday to discuss a temporary humanitarian ceasefire.

However there was no immediate comment from Hamas as to whether that trip would go ahead.

The Palestine Liberation Organisation (PLO) said it had garnered the Islamist movement's support for a 24-hour truce, but did not say when it was expected to start.

Palestinian president Mahmud Abbas had been in touch with exiled Hamas chief Khaled Meshaal on Monday and Tuesday and had "proposed the 24 hour truce," senior Palestinian official Nabil Shaath told AFP on Tuesday.

But Hamas said it had not so far agreed to any new truce and was waiting for Israel to show its hand first.

"When we have an Israeli commitment... on a humanitarian truce, we will look into it but we will never declare a truce from our side while the occupation keeps killing our children," spokesman Sami Abu Zuhri said.

Among those killed in the early Wednesday shelling and air strikes was a disabled 11-year-old girl in northern Gaza and a 16-year-old girl in Bureij refugee camp in central Gaza, medics said.

A strike shortly afterwards in the southern city of Khan Yunis killed nine members of a single family, including one child.

UN figures indicate at least three quarters of the dead were civilians.

Hamas fire, including thousands of rockets launched at Israel, has killed 53 soldiers and three civilians inside the Jewish state.

Rights groups have expressed alarm at the number of children victims.

The more than 240 children who have died represent at least 29 percent of civilian casualties, the United Nations Children's Fund, UNICEF, said in a statement, adding that another six children in Israel had been wounded from Gaza rocket fire.