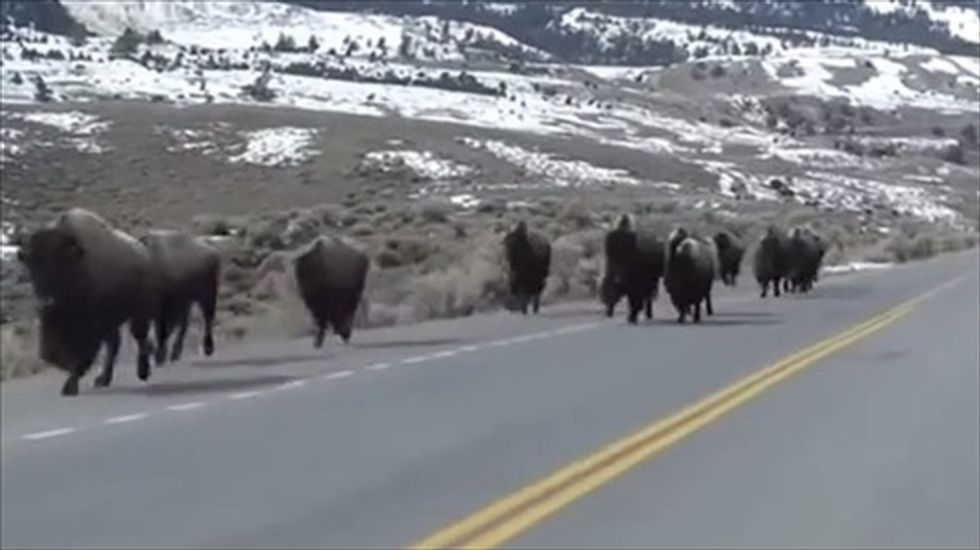 (Reuters) - New herds of genetically pure wild bison may once again roam vast expanses of the American West where the iconic animal has been absent since the end of the 19th century, under a tentative plan federal officials advanced on Wednesday.

The proposal, for which Yellowstone National Park officials have begun seeking public comment, is almost sure to draw staunch opposition from ranchers concerned about disease, competition for grass and property destruction from straying bison.

Yellowstone is now home to more than 4,000 bison, or buffalo, constituting the bulk of the country's last pure-bred population of the animals.

Dozens from the Yellowstone herd have been relocated to two Montana American Indian reservations in recent years. Park officials, wildlife advocates and Native American groups are now eager to restore wild bison to more of their native habitat.

A recent U.S. Interior Department report on bison concluded they could potentially be reintroduced to swaths of public lands it manages in states such as Colorado, Arizona, New Mexico, Nebraska and South Dakota, without posing a risk to livestock.

The chief concern is brucellosis, an infection that causes stillbirths in cows and may have been transmitted to roughly half the bison in Yellowstone from exposure to cattle.

Park wildlife managers are eyeing a plan that would start by quarantining dozens of bison for several years to prevent them from contracting the disease. Those animals shown to be free of brucellosis could then be considered for relocation to establish controlled herds elsewhere, said David Hallac, chief of Yellowstone's science and research branch.

The park is one year away from crafting a final proposal, which will be shaped by the public comment period that opened on Wednesday and closes in September, he said.

Quarantine facilities could be placed inside the park, which spans parts of Wyoming, Montana and Idaho, just outside its borders, or on lands owned by Native American tribes.

Hallac said a program that would see new bands of bison with the prized genetics of the Yellowstone herd established across the West would mark a conservation milestone.

Millions of the powerful, hump-shouldered animals once roamed the plains west of the Mississippi until systematic hunting drove their numbers to the fewer than 50 that found refuge in Yellowstone in the early 20th century.

But livestock industry representatives said even disease-free bison could prove problematic to the landscape, since the outsized animals would likely venture beyond fences or property lines and might compete with cattle for forage.

“We have legitimate concerns about containment and damage to private property and we need to address the impact on ranchers that graze on federal lands,” said Jay Bodner, natural resource director for the Montana Stockgrowers Association.