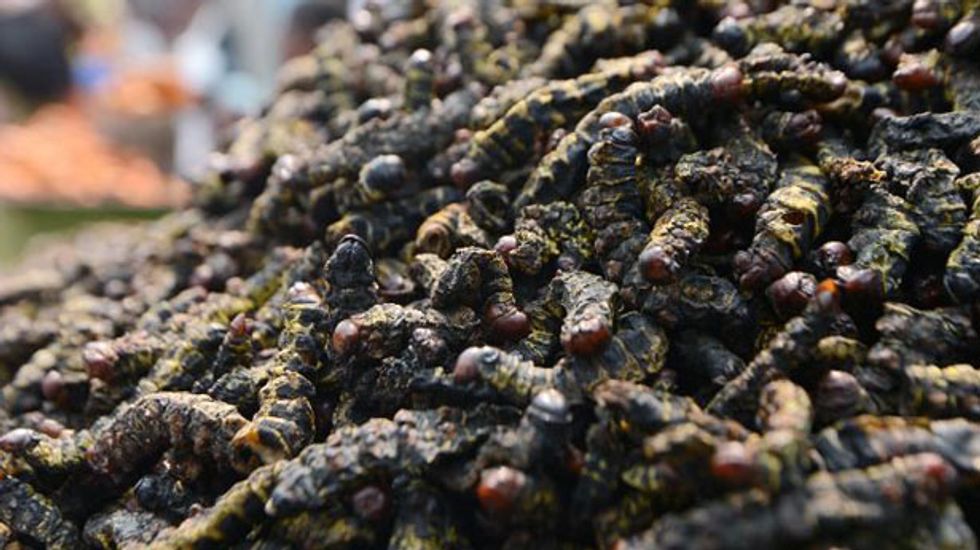 In Kinshasa's Gambela market shoppers can find insects for every occasion -- from unctuous white weevil larvae for fancy dinners to crispy caterpillars and snacky termites that stick in your teeth.

They may be an unbeatably cheap source of protein, but DR Congo's many insect connoisseurs insist they also have real gastronomic value. And the crowds pressing around the insect sellers at the market show that the Congolese can't get enough of them -- crushed, boiled or fried.

"The caterpillars and the other insects we eat are very rich in protein," said Maguy Manase, a seller at the market.

Caterpillars are sold living, dried or boiled up into a kind of porridge. Pyramids of them are piled up on old wooden stalls or on the ground in the huge market. Termites, however, are only sold alive, ladled fresh into customers' bags. There are grasshoppers too, when they are in season.

Prices vary wildly from one type of insect to the next. Elise Yawakana has treated herself to six fat larvae at 1,000 Congolese francs (around 80 euro cents or $1.10) each.

Ninety percent of the DR Congo's population live on less than $1.25 a day, according to the United Nations.

Caterpillars are "better than fresh meat", declared Marie Nzumba, who has been selling them for 15 years.

Conscious of insects' high nutritional value, the DR Congo government has been encouraging families to include insects in their children's diet.

The Boyambi health centre in the capital, run by the Salvation Army, even offers daily courses on how to cook insects.

Nurse Emilie Kizayako Mpiedi encourages mothers to supplement the diets of their breastfed babies after six months with a porridge made from caterpillar flour.

With more than half of all children under five in the DR Congo suffering from either chronic or acute malnutrition, according to the World Food Programme, insects could be a key part of the solution.

Caterpillars in particular are "within everyone's budget", but that does not mean that they, or insects in general, are "the food of the poor", the nurse said.

One in three people in the world already eat insects, a recent report by the UN Food and Agriculture Organisation found, encouraging the consumption of insects "to respond to problems of food security".

For the moment in the DR Congo, insects are harvested directly from the wild, mostly from the jungles and forests of Bandundu and Equator provinces in the west of the country.

And people eat them just because they like the taste, said Bonaventure, a smiling driver, as he munched his way through a plate of insects in a little Kinshasa cafe. "It's good. I prefer insects to meat," he said.

Whatever the caterpillar recipe, whether the bugs are smothered in "mwambe" (peanut sauce), served with vegetables or fried with tomatoes, Bonaventure loves them all.

Lots of roadside food stalls and shacks serve chillied insects to spice up "fufu", the stodgy Congolese staple of corn meal and manioc.

Now that Donald Trump is out of office, his most loyal supporters can't decide whether they're anti-government insurrectionists or victims of liberal overreach.

A handful of the former president's loyalists showed up at the Louisiana capitol in Baton Rouge to protest Joe Biden's inauguration and, hopefully, share their misery with others who believed that somehow Trump would find a way to remain in office despite losing the election, reported Voice of America.

The Bible featured prominently in the inauguration. In fact, three were used in the swearing-in ceremonies – Kamala Harris used both Thurgood Marshall's and one belonging to a friend; Joseph Biden used a 128-year-old family Bible.

About two weeks earlier, on Jan. 6, rioters who stormed the U.S. Capitol also held Bibles as a nod to the apparent religious motivations for their actions. The mob took with them flags saturated with Christian nationalist ideology, such as banners with “Jesus Saves" written on them accompanied by chants that “Christ is king, Trump is president."

Pro Publica
The gallery in the Idaho House was restricted to limited seating on the first day of a special session in late August. Lawmakers wanted space to socially distance as they considered issues related to the pandemic and the November election.