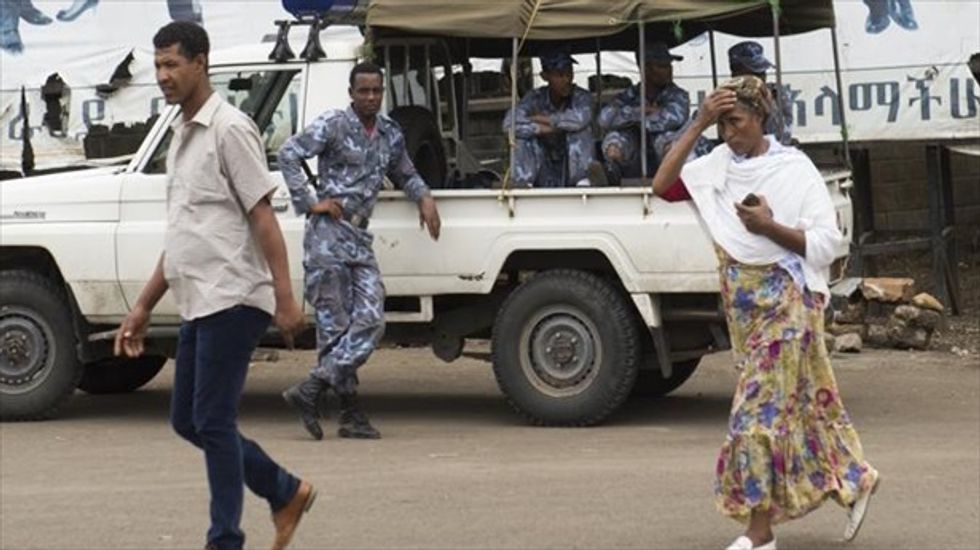 Members of the Ethiopian Federal Police and pedestrians in Addis Ababa, Ethiopia, May 1, 2014 [AFP]

Addis Ababa (AFP) - The lawyer for a group of detained Ethiopian bloggers and reporters said Thursday he was filing a civil suit against the country's police for holding them without charge for nearly three months.

The six members of the blogging collective Zone Nine and three journalists were arrested in April and accused by the government of "serious crimes", including having links with outlawed groups and of planning attacks in Ethiopia.

The Zone Nine site, proclaiming "we blog because we care!" features mostly social and political commentary, often critical of the government.

Rights groups have condemned the arrests as one of the worst crackdowns on the press in recent years and accuse the Ethiopian government of silencing dissent ahead of national elections next May.

"We are waiting for charges to appear. I'm going to lodge a civil suit against police requesting the court to compel the police to release them," the lawyer for eight of the suspects, Amaha Mekonnen, told AFP.

He said his clients were currently in legal limbo, because a remand court had closed the case without authorising the police to keep them in jail and without permitting them to be released on bail.

"Their detention is illegal," Amaha said, adding that he would be filing his challenge on Thursday.

"This is for me a clear campaign from the government to clear the floor so that it's suitable for the ruling party," he alleged, saying the investigation was dragging on because the bloggers and journalists were arrested "without sufficient evidence".

The Ethiopian government said the suspects were detained legally.

"They are suspected of their links with those elements who are hell-bent on trying to topple this government through unconstitutional means," Communications Minister Redwan Hussein told AFP.

According to the Committee to Protect Journalists (CPJ), Ethiopia has one of the most closed media environments in the world, with 49 journalists living in exile -- the most after only Iran and Somalia.

"Ethiopian authorities are trying to create the impression that this is a legal matter, when in fact it is retaliation and an attempt to silence government detractors," said the CPJ's Tom Rhodes.

Redwan dismissed the charge, and said critical, independent media is tolerated in Ethiopia.

"It's not about the criticism. Those who are criticising are already here in Addis (Ababa) printing day in, day out," he said.