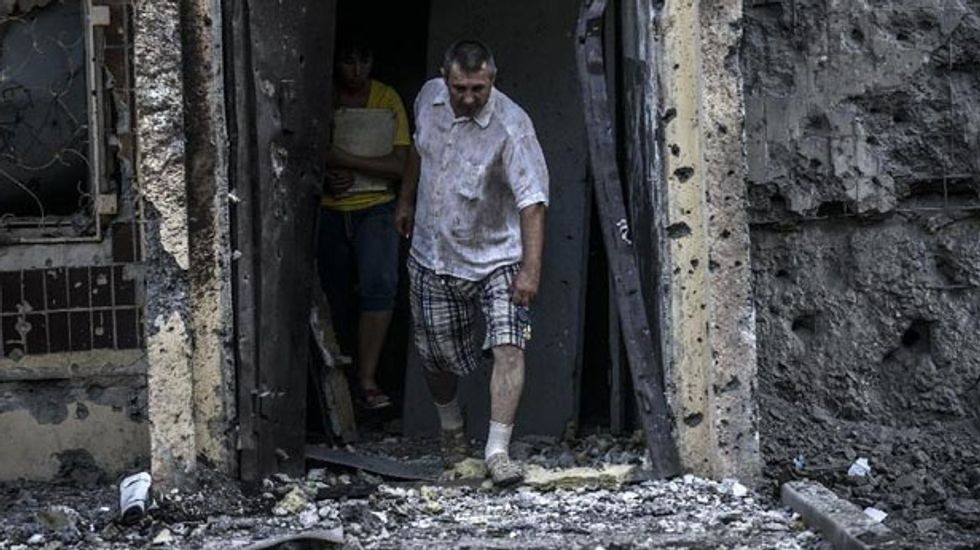 After months of hesitation, the EU finally agreed Tuesday to impose economic sanctions against Russia, hoping to make it change course in Ukraine as fighting intensified around cities held by pro-Moscow rebels.

The new measures impose restrictions on the finance, defence and energy sectors so as to increase the cost to Russia of its continued intervention in Ukraine.

"A political accord has been reached on the package of economic sanctions," an EU official said, after the 28 member state ambassadors agreed a response driven by the alleged shooting down of Malaysia Airlines flight MH17 by rebels using a Russian-made missile.

For months since the crisis broke in November, the European Union had restricted itself to so-called 'Phase 2' asset freezes and visa bans on those implicated in or profiting from the Ukraine crisis.

Washington complained such measures were not enough, suggesting that Brussels was being held back by the EU's extensive economic ties with Russia, which supplies a third of the bloc's gas and is a major trade partner.

The loss of MH17, however, dramatically changed thinking, even among holdouts such as Germany and Italy, and put broad 'Phase 3' economic sanctions at the top of the EU agenda.

US Secretary of State John Kerry said separately that Washington was also "preparing additional sanctions, with Europe," adding that Russian President Vladimir Putin "still has a choice" in what course to take in Ukraine.

Details of their names and will be made available in the EU's Official Journal this week, with the new sanctions likely to come into force shortly once the legal procedures are completed.

Moscow has consistently derided the US and EU sanctions, condemning them as ineffective and counterproductive to shared interests in such key areas as the fight against terrorism.

"I can assure you that we will overcome any difficulties that develop in various sectors of the economy and maybe we will become more independent and confident in our own strength," Russian Foreign Minister Sergei Lavrov said Monday.

On the other side, British energy giant BP, which owns almost 20 percent of Russian state oil giant Rosneft, warned Tuesday that the new sanctions could seriously damage its interests.

An EU diplomat cautioned that as sanctions increase, Putin may feel he has less to lose and it should not be forgotten the Russian leader has many options.

"He could take military action, he could increase help for the rebels, he could help them bring down Ukraine government planes," the diplomat said.

Another EU diplomat played down this possibility, saying the bloc's leaders will have taken it into account when they agreed to up the ante with Putin.

"Putin is going to try and divide the Europeans and his response will be a test of the EU's unity," the diplomat said.

Western sanctions in the past have proven controversial, failing to deliver results as quickly as hoped in such cases as Cuba and Zimbabwe, countries that suffered badly but also learned how to get around many of the restrictions.

The remains of some of the 298 victims, who included nearly 200 Dutch, still lie there 12 days after the disaster.

The Ukrainian military said they were not involved in hostilities in the area, charging instead that insurgents were firing on their positions from nearby towns.

Key insurgent-held cities further afield came under heavy bombardment, as the government pushed its offensive to regain control of the eastern industrial heartland.

Heavy fighting was also ongoing in another rebel stronghold Lugansk where local authorities reported five killed and eight wounded in the past 24 hours.

More than 1,100 people have been killed in the fighting in the past three months, the United Nations said.