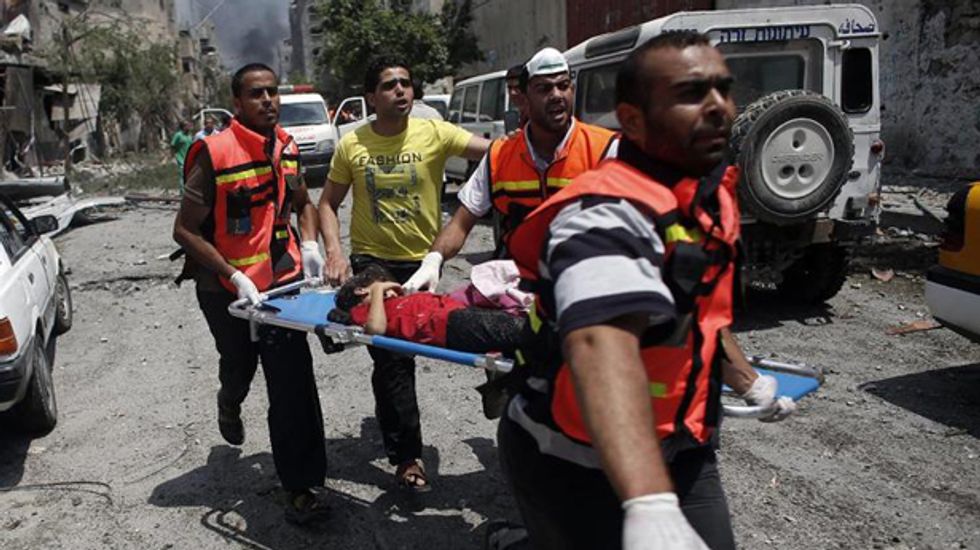 The ambulances and firetrucks of Gaza's emergency services gathered on the edge of the Shejaiya district to await news of a humanitarian ceasefire between Israel and the Palestinian Hamas group.

The word arrived at 1030GMT -- a two-hour truce to allow the retrieval of the dead and wounded, as well as evacuate the terrified people who remained inside the district after a night of non-stop Israeli tank fire.

A convoy of vehicles formed, advancing slowly into the district, with the sound of shelling still thudding through the air.

It was impossible to tell if it was in the Shejaiya district, or an adjacent neighbourhood, so the vehicles moved in anyway.

Inside were scenes of absolute devastation: entire buildings collapsed on themselves or strewn into the streets.

Mangled trees were bent over, children's shoes -- a girl's purple slipper, a boy's blue flip-flop -- mixed in with the rubble underfoot.

An entire apartment building of several floors was still ablaze, the fire burning on the ground floor and covering the facade with black soot.

And there were bodies lying in the streets.

Some were burnt almost beyond recognition, whole appendages missing.

One man in his houserobes was completely charred black except for his internal organs, which were starkly yellow against the coal colour of the rest of his body.

The dead were young and old, with more than one lifeless child carried out by frantic ambulance workers.

They also found the carcass of one of their vehicles, its windows all blown out and holes punched into its sides by shrapnel.

It was unclear whether it was the vehicle in which emergency services worker Fuad Jaber had been killed along with Palestinian journalist Khaled Hamad early on Sunday morning.

The civil defence forces moved through the streets on foot with doctors and medics who pulled surgical masks over their faces as they entered buildings full of bodies.

"If you're still here, come out it's safe. We're the civil defence," one official shouted as they advanced along the streets.

But throughout, the sound of shelling could be heard, and soon after there was also the sound of automatic weapons fire.

The glass in every building on the main Nazzaz Street had been blown out, along with many of the doors.

Curtains ripped by shrapnel were fluttering in the wind.

A few terrified civilians emerged -- two women and a man.

Her relatives tried to comfort and calm her as they ran out of the area.

But not all those fleeing were civilians.

A handful of gunmen, carrying automatic weapons streamed out of one building, some of them wrapping their faces in scarves as they fled.

One of them tried half-heartedly to hide his weapon by wrapping it in a checkered scarf, before eventually stuffing it into a plastic bag.

In one building, three men peered suspiciously at the arriving emergency service workers through a hole in a wall.

They emerged one-by-one through the hole and into the street, pointing the medics around the corner.

"There are four people dead, under a staircase that collapsed," one said.

But only one was visible -- a man whose legs were sticking out of the rubble, heavy-duty black boots on his feet.

The medics said there was nothing they could do for the dead still trapped under buildings.

"The civil defence will try to get them out, but we can't move them like this. We can only carry out the injured and the dead that we can move," one medic said.

A few wounded emerged, including an elderly man with an injury to his hand, who was shaking as his son escorted him out.

But the shelling began to intensify -- in Israel, the army announced Hamas had breached the truce and it was responding "accordingly".

Shells started to land not far from the main street and set new fires that added to the thick smoke already rising from the area.