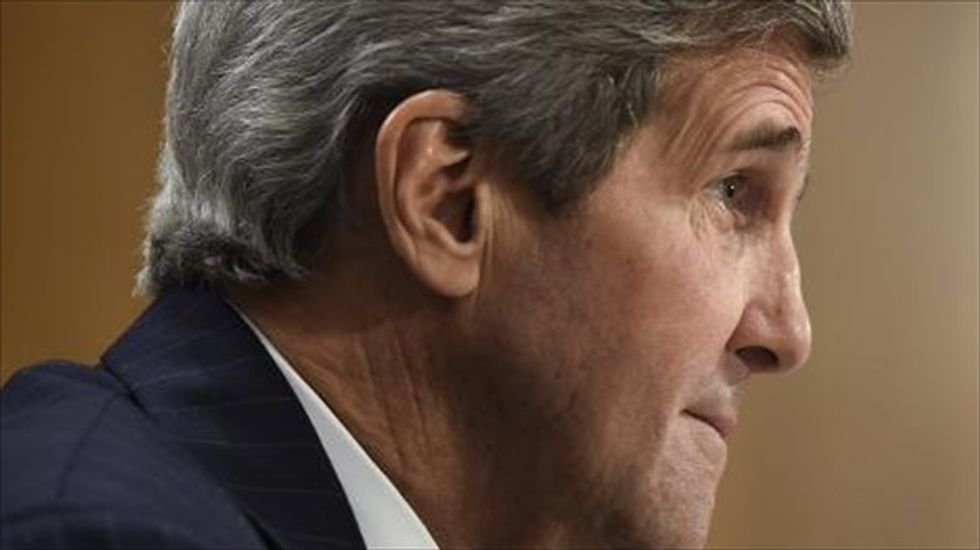 US Secretary of State John Kerry Sunday blamed Hamas for the continuation of the conflict in Gaza, saying the Islamic militants were refusing all ceasefire efforts.

"They've been offered a ceasefire and they've refused to take the ceasefire," Kerry told ABC television, adding Hamas has "stubbornly" refused efforts to defuse the conflict "even though Egypt and others have called for that ceasefire."

By its behavior, Hamas had "invited further actions" by the Israelis to stop the rocket fire from the Gaza Strip into southern Israel, Kerry said.

"It's ugly, obviously. War is ugly, and bad things are going to happen. But they need to recognize their own responsibility," he added, referring to Hamas.

The top US diplomat urged Hamas to "be responsible and accept... a multilateral ceasefire without conditions."

More than 87 Palestinians were killed Sunday as Israeli forces pounded northern Gaza, sending thousands fleeing in terror in the deadliest assault on the enclave in five years.

Thirteen Israeli soldiers were also killed in a series of attacks inside Gaza.

Kerry, caught in an unguarded comment while talking to an aide during his round of interviews, seemed to reveal some frustration with Israel at the mounting death toll.

Kerry then replied: "I think, Jon, we ought to go tonight. I think it's crazy to be sitting around."

Israeli Prime Minister Benjamin Netanyahu told CNN the operation to destroy a network of tunnels in Gaza could be over "fairly quickly" but would not be pinned down on specifics.

"We're taking action to neutralize the tunnels and do it as long as necessary," he said.

Blitzing the Sunday television talk shows, Kerry said he was planning to meet up with UN chief Ban Ki-moon who is headed to the Middle East to lend his efforts to seeking a truce.

"We're working on the idea of a ceasefire," Kerry told CNN television, adding President Barack Obama was to speak later Sunday with Netanyahu.

"Israel is under siege by a terrorist organization that has seen fit to dig tunnels and come through those tunnels with handcuffs and tranquilizer drugs, prepared to try to capture Israeli citizens and take them back to hold them hostage," Kerry said.

"No country could sit by and not take steps to try to deal with people who are sending thousands of rockets your way."

Although the United States does not deal directly with Hamas, which is blacklisted as a terrorist organization, Kerry has been urging countries such as Turkey and Qatar to use their influence to bring Hamas to negotiations.

He told CBS's "Face the Nation" that he was "planning to go, and probably very shortly" to the Middle East, saying he would talk with Obama later Sunday.

"If the president deems that this is the moment that is appropriate, obviously we'll go immediately."