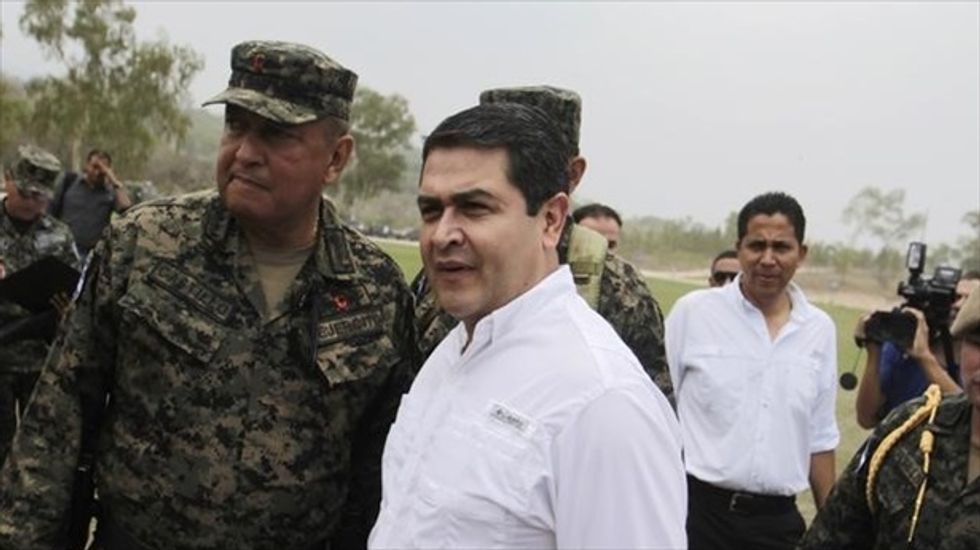 TEGUCIGALPA (Reuters) - Honduran officials on Wednesday called for U.S. aid to Central America to reduce violence that has fueled a surge of child migration to the United States, with the foreign minister calling for a "mini-Marshall plan" to attack the broader underlying problems.

Honduran President Juan Hernandez said Washington should help Guatemala, El Salvador and Honduras fight gangs with a plan similar to U.S. anti-drug programs in Colombia and Mexico, as well as funds to lift growth in the impoverished region.

"One has to recognize that our countries can't do it alone," he said at a conference about the unaccompanied minors fleeing for the United States. "We need help from the United States, from Mexico, because this is everyone's problem."

Honduran Foreign Minister Mireya Aguero told the conference efforts to step up security at the U.S. border were not working and that U.S. aid would be better spent in Central America.

"It's much more practical for the United States to launch a mini-Marshall plan, as they did after World War Two, to create opportunities and really get to the root of the problem in Central American countries that is fueling migration," she said.

Simon Henshaw, the U.S. principal deputy assistant secretary of state for population, refugees and migration, said that the economic situation in Central America should be addressed with the help of international and regional development banks.

"It's clear, however, that it requires the best efforts by all stakeholders," said Henshaw, speaking alongside Aguero and the foreign ministers of Guatemala and El Salvador. "That means better political will from all countries."

Hernandez, who took office in January after pledging to crack down on crime, said U.S.-backed battles against cartels in Colombia and Mexico have pushed drug traffickers into Central America, increasing violence, which is causing the exodus.

Yet he underlined the success of U.S. efforts in Colombia.

"Today, for example, Plan Colombia is showing major success. It was worked on together, those generating demand for drugs in the north and those producing drugs in the south assumed joint responsibility and it was effective," he said.

Honduras now has the highest murder rate in the world.

Thousands of Central American migrants have been streaming into the United States through Mexico, and those caught are being held in overcrowded detention facilities.

A local U.N. official who also spoke at the conference in Honduras said that U.N. Secretary-General Ban Ki-moon is "deeply concerned" about the child migrants. He urged the governments involved "to urgently protect the human rights of migrant children."

[Image: Honduras' President Juan Orlando Hernandez (C) talks to officers of Honduras' army during a presentation in Mateo, on the outskirts of Tegucigalpa in a May 7, 2014 file photo. By Jorge Cabrera for Reuters]