'I thought I was going to get into a shooting': FL cop films his fight with a superior officer 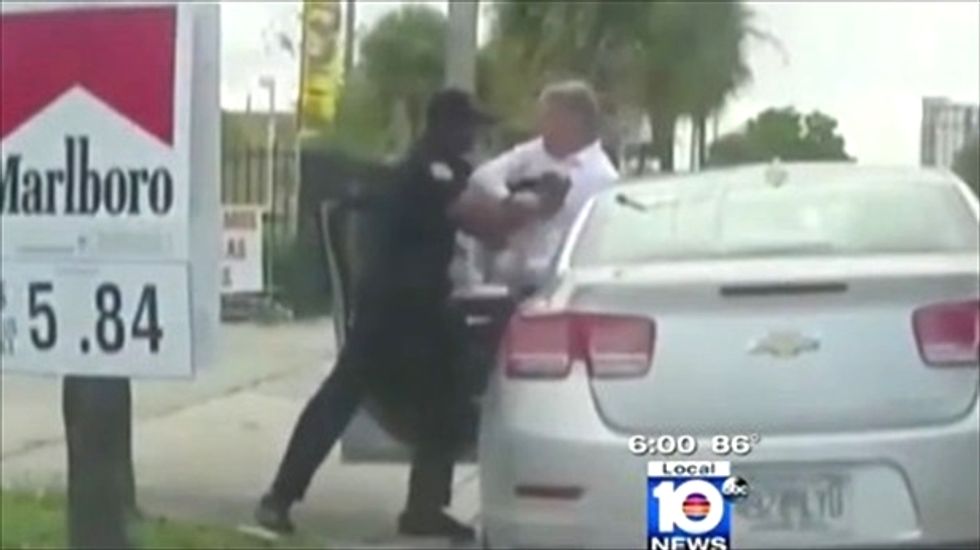 Florida cop films his fight with a superior officer [WPLG-TV]

Miami police are investigating an altercation between two of their officers that was caught on camera against department regulations, WPLG-TV reported.

The footage, recorded on Officer Marcel Jackson's personal video equipment, shows Jackson throwing Lt. David Ramras to the ground after Jackson pulled Ramras over for speeding. Jackson also recorded a phone call he made after the stop, by which point Ramras had been identified as a lieutenant in the department's Internal Affairs unit.

"I had to like, sling him to the ground," Jackson can be heard saying to an unidentified officer. "Bro, I thought I was going to get into a shooting."

It's unknown why Jackson was using his own camera to record the encounter. Miami police currently do not carry dashboard cameras on their vehicles.

The footage begins with Jackson approaching Ramras' vehicle after pulling him over. WPLG reported that, according to Jackson, Ramras initially refused to pull over, leading to a brief pursuit before Ramras stopped.

Ramras can then be seen opening his door and attempting to leave his vehicle. But Jackson then pins him against the car before throwing him to the ground. During his phone call, Jackson said Ramras told him, 'Get the f*ck in your car' while attempting to pull rank.

WTVJ-TV reported that Ramras also allegedly asked Jackson, "Do you know who the f*ck I am?" and, "What's all that stuff on your face?"

Three other officers are then seen in the video arriving in separate vehicles and assisting Jackson in subduing Ramras. The other officers at the scene were reportedly unaware that Jackson was recording the encounter.

The Miami Herald reported that Ramras has been assigned to another post during the course of the investigation, while Jackson has been relieved of duty with pay, in part because he has refused to turn over his camera after providing the video of the encounter.

"An officer recording traffic stops with a private camera, the rules say you can't do that," Chief Manuel Orosa was quoted as saying. "We're liable for what he does at work and [the video] needs to be stored for safekeeping. If it's destroyed, that's a no-no."

Watch WPLG's report, as aired on Monday, below.