If you want to understand why a UN official broke down on TV, read his tweets 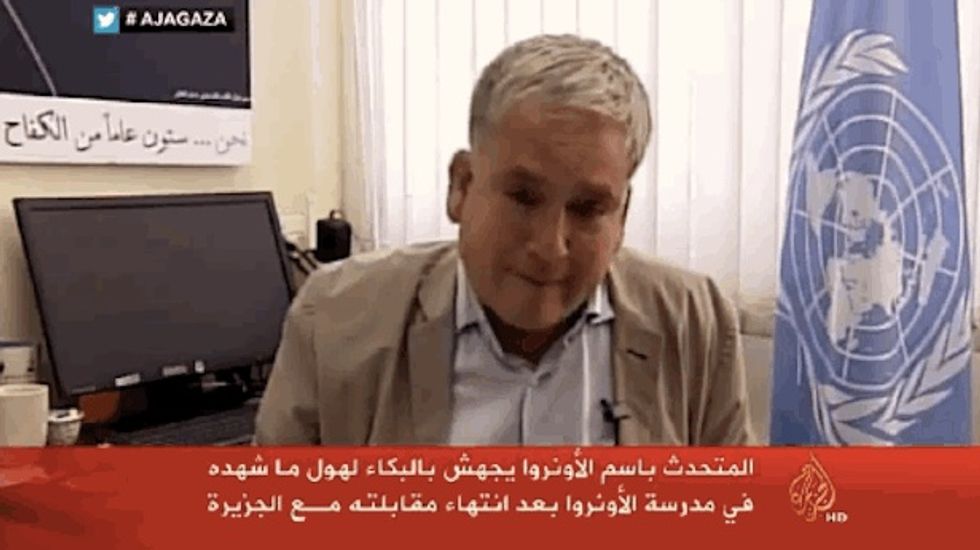 Chris Gunness, a spokesman for United Nations Relief and Works Agency (UNRWA) and former BBC reporter, was finishing up a TV interview on Al Jazeera Arabic when he broke into tears over the state of affairs in Gaza. Right before crying, he says, "The rights of Palestinians - even their children - are wholesale denied. And it's appalling" and then, to sign off, says, "My pleasure." As he breaks down a colleague comforts Gunness and the camera pans away. (The video is at the end of the post.)

Gunness had been talking about the Israeli army's shelling of a U.N. school in the Jabaliya refugee camp in Gaza, on Wednesday morning. Hundreds of Palestinians had taken refuge at the school and between 13 and 20 people were killed. The IDF says that they were retaliating for rockets fired into Israel by Hamas from nearby the school. Regardless, it is a violation of international law to either attack a U.N. facility or store weapons in one. This is the second time Israel has hit a U.N. facility this week, having hit killed at least 16 people at a U.N. compound in Beit Hanoun, which killed at least 16 people.

I’m not emotionally drained... I’m made of a sterner stuff, as my English grandmother would say.... My feelings pale into insignificance compared to the enormity of the tragedy confronting each and every other person in Gaza at this time. It’s important to humanize the statistics and to realize that there is a human being with a heart and soul behind each statistic and that the humanity that lies behind these statistics should never be forgotten.

Gunness's tweets tell the story that so understandably caused the spokesman to breakdown.