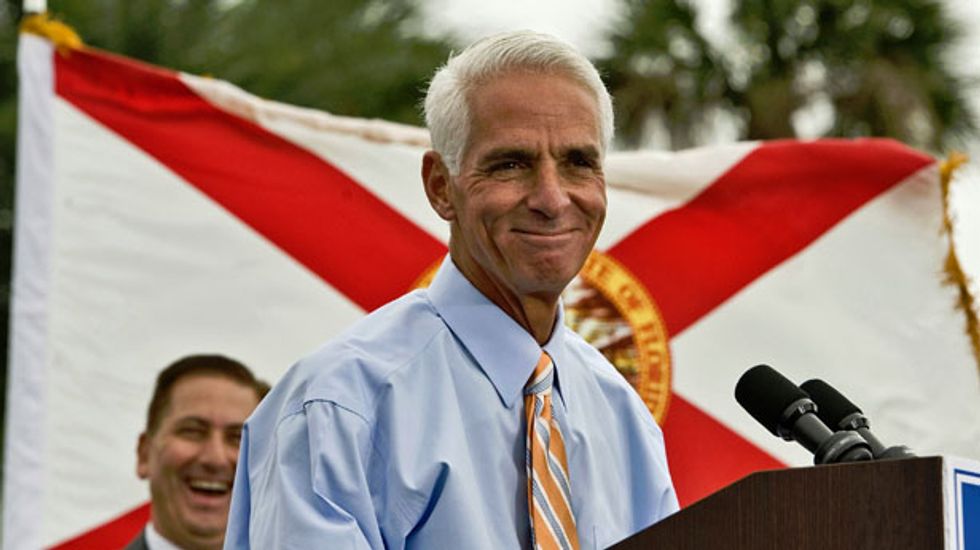 TAMPA Fla. (Reuters) - As the leading Democratic candidate for Florida governor, Charlie Crist would be expected to draw overwhelming support from the state's more than 1.6 million registered black voters.

But rallying them is proving a challenge for the 58-year-old former Republican, who is facing a tight race against incumbent Governor Rick Scott and needs a heavy turnout by minority and liberal voters to deliver a major political prize to the Democrats.

"Charlie Crist has some real work to do to regain trust in the black community," said Daniel Smith, a political science professor at the University of Florida in Gainesville. "He’s got a mixed track record."

A lawyer and campaign veteran who became a Democrat nearly two years ago, Crist served as the Republican governor from 2007 to 2011 after beginning his political career as a state senator, where he was dubbed "Chain Gang Charlie" for proposing prisoner roadside work crews.

"I believe in justice, and I think most Floridians do," Crist told Reuters when asked about the inflammatory nickname. He added, "I also believe in forgiveness."

The moniker has resurfaced lately in racially charged radio ads and flyers, while some early polls show his support among black voters, who make up more than a quarter of Florida's Democrats, falling short of what is likely needed to wrestle the state from Republican hands after almost 16 years.

Since switching parties, Crist has changed several political positions: he now supports gay marriage and gun control. He has made high-profile public appearances with party heavyweights such as President Barack Obama and former President Bill Clinton.

Still, he has struggled to convince some voters, who view him as a political opportunist, that he has their interests at heart. Many black voters, in particular, were turned off in 2010 when Crist jumped into a U.S. Senate race as an independent, after a challenge from the right in a Republican primary, drawing support away from the black Democratic candidate.

"Charlie Crist is a smooth operator, a used car salesman, but he doesn’t mean the African American community any good," said Leslie Wimes, a black Democratic blogger who founded a women's business group in south Florida.

A recent poll conducted by Quinnipiac University put his support among black voters at 72 percent against Scott, well below the more than 90 percent analysts believe he needs to win.

At about the same time, a poll by SurveyUSA for a Tampa-area TV station showed he may be gaining ground. It put his support among black voters at 92 percent, an abrupt jump of 20 to 30 points from earlier surveys by the group, although pollsters warned it was too early in the race to draw conclusions.

Crist said he will get the votes. His campaign, which appears to be making inroads by reaching out to black church leaders and canvassing neighborhoods, points to several policies he pushed through as a Republican that won praise from black leaders.

In 2008, for instance, when voters were standing in long lines at the polls, Crist extended early voting hours. He also helped restore voting rights for many felons.

Earlier this month, Crist was warmly greeted at a predominantly black church in Tampa during a candidate forum.

In the audience was Iris Metcalf, a 51-year-old secretary who voted for Crist for governor when he ran as a Republican. "Parties evolve and people evolve," said Metcalf, who still supports Crist.

Crist's biggest hurdle in securing the key black turnout may be a series of provocative ads by Progressive Choice, a group based in Maryland that says it formed some months ago to advocate for liberal issues such as reproductive choice, equal rights and education.

While the group has criticized Crist's positions as a Republican on a range of issues, its most vociferous attacks have centered on race.

One of the ads, set against a pulsing hip hop beat, urges black voters to break the chains, a reference to his past support of chain gangs. Another ad blames him for a "lost generation of African Americans."

As a federally registered, social welfare organization, Progressive Choice does not disclose donors. Crist strategists call it a shadow operation for conservatives, which the group denies.

"The challenge in front of him is owning up," said Dwight Bullard, a Democratic state senator from a prominent black political family who is supporting Crist's underdog opponent in an August primary. "To let those ads linger out there unanswered, I think, is really harming the turnout."

The challenge for Crist is to lure black voters to the polls by addressing issues they care about, such as school discipline and the justice system, political analysts said.

"Democrats are not going to be voting for Rick Scott. The question is whether or not they will turn out to vote," Smith said.