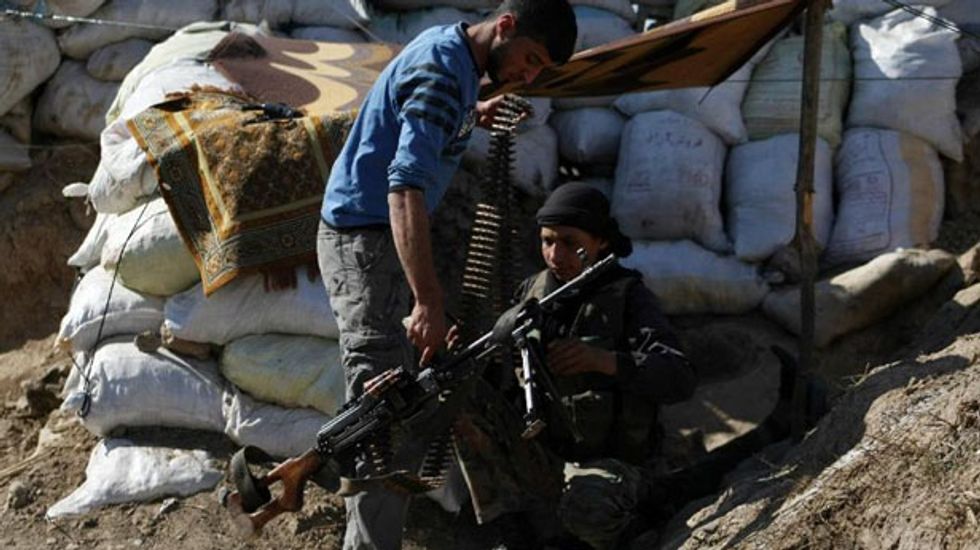 The jihadist Islamic State (IS), which has taken over large swathes of war-torn Syria in just a few months, was on Thursday engaged in fighting Kurds and members of a Sunni tribe.

The Syrian Observatory for Human Rights said the well-equipped Kurds, who started fighting IS soon after it emerged in Syria in spring last year, had on Wednesday taken back several hills surrounding the city of Ain al-Arab (Kobane in Kurdish) in the north.

The IS has been trying to take over Ain al-Arab -- Syria's third Kurdish city -- and incorporate it into the Islamic "caliphate" it proclaimed last month.

The fighting killed 14 members of the Kurdish People's Protection Units (PYG) and 35 IS members. Dozens of other fighters were wounded, said the Observatory.

The fighting comes two weeks after some 800 Kurdish fighters entered Ain al-Arab from neighbouring Turkey to fight IS.

There are some 3.5 million Kurds in Syria, comprising some 15 percent of the population. With the country swamped in a war that broke out three years ago, the Kurds are seeking autonomy in the areas where they are a majority.

Eastwards, the IS pounded regime positions in Hassakeh, as they tried to surround the city of 200,000 Kurds, Arabs, Armenians and other Christians.

In the eastern, oil-rich province of Deir Ezzor, most of which is under IS control, members of the Shaitat Sunni tribe fought the jihadists, tweeting about an "uprising" against the radical group.

The fighting erupted after the IS detained three members of the tribe, "violating an agreement" between the two sides, it said.

According to the Observatory, the Shaitat tribe had promised IS it would not oppose it, in exchange for the jihadists not harassing or attacking its members.

On Thursday, a day after fighting broke out, IS members raided the three villages, searching houses and kidnapping or "detaining" an unknown number of people, said the Observatory, adding that fighting was raging in the Shaitat villages.

Meanwhile, IS set up new checkpoints in the Deir Ezzor countryside, but gunmen opened fire at one of the checkpoints.

At least five jihadists were killed in the fighting, including a Belgian.

Syria's war began as a peaceful movement for democratic change, but erupted into conflict after President Bashar al-Assad's regime unleashed a brutal crackdown against dissent.

Many months into the fighting, foreign jihadists began entering Syria.

Also on Thursday, the Observatory reported that IS had imposed a strict dress code for women in Deir Ezzor, forbidding them showing any part of their bodies.

"Women... are completely forbidden from showing their eyes," said an IS statement that the Observatory said was distributed in areas under jihadist control in Deir Ezzor province.

It threatened an unspecified punishment for women who violated the dress code, while also banning the sale of cigarettes and narguileh (water pipe) products, as well as smoking in public.

On another front in Syria's complex war, the number of people killed in army shelling on an opposition-held town northeast of Damascus on Wednesday rose to 17, according to the Observatory.

Among the fatalities were three children. Dozens of other people were injured.

An AFP photographer in Douma, which has been under suffocating army siege for more than a year, said the shelling had hit several parts of the town, including a busy market area.

"The shelling came suddenly. One minute, children were playing in the market, the next, there were body parts and wounded people everywhere," Abd Doumany said.

The photographer also described graphic scenes at one of the town's ill-equipped field hospitals.

"The wounded were being treated on the floor," he said.