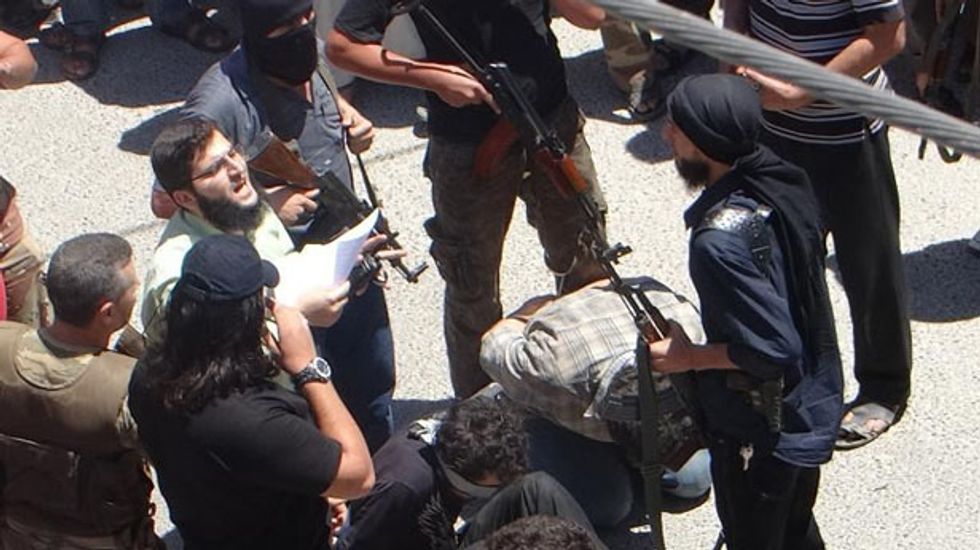 Islamic State fighters have seized a Syrian army base in the northern province of Raqa, killing scores of troops and beheading some of them, a monitoring group said Saturday.

But in the central Homs region, government forces recaptured Al-Shaar gas field, seized by IS a week before, the monitor and Syria's army said.

The jihadist takeover of the base of Division 17 came as the UN Commission of Inquiry on Syria said IS fighters accused of atrocities would be added to a list of war crimes indictees.

In the two-day assault on the base in Raqa province, an IS bastion, the jihadists killed at least 85 soldiers, the Syrian Observatory for Human Rights said.

More than 50 troops were summarily executed, 19 others were killed in a double suicide bombing and at least 16 more died in the assault launched early Thursday.

Hundreds of troops "withdrew on Friday to safe places -- either to nearby villages whose residents oppose IS or to nearby Brigade 93 -- but the fate of some 200 remains unknown," Observatory head Rami Abdel Rahman said.

"Some of the executed troops were beheaded, and their bodies and severed heads put on display in Raqa city," an IS stronghold, he told AFP.

The jihadists also posted photographs online of the bodies of decapitated soldiers strewn across the ground.

In one, six bloodied heads were lined up together on the ground, and other pictures showed headless bodies, mostly wearing combat fatigues.

Abdel Rahman said IS intended the display as "a message to the people of Raqa, to tell them it is strong, that it isn't going anywhere, and to terrify" opponents.

But government forces retook the key Shaar gas field in Homs province, nearly a week after it fell to IS, who killed some 270 government troops in the attack, the Observatory said.

"The army has succeeded in ejecting the jihadists, and it now controls the site," Abdel Rahman said.

The Syrian army also said its forces and regime paramilitaries "took total control of Al-Shaar mountain and its gas field".

It "killed many terrorists from the so-called Islamic State," the statement carried by state news agency SANA said.

In the northeastern province of Hasakeh, the Observatory reported heavy fighting between jihadists and government forces in an area where IS killed at least 50 soldiers on Friday.

Elsewhere in northern Syria, 30 troops and pro-regime paramilitaries were killed in an overnight ambush in Aleppo province, the Observatory said.

IS, which first emerged in Syria's war in spring 2013, has since imposed near-total control in Raqa province and Deir Ezzor on the Iraq border.

In June, the group proclaimed a "caliphate" straddling Syria and Iraq.

Despite opposition by poorly armed rebels fighting both the army and IS, the jihadists have advanced in several areas of Syria, whose three-year war has killed more than 170,000 people.

"For IS, fighting the regime is not about bringing down Assad. It is about expanding its control," said Abdel Rahman.

IS was emboldened by a June offensive in Iraq when swathes of the north and west fell out of Baghdad's control.

On Friday, Brazilian Paulo Pinheiro, who heads the UN Commission of Inquiry on Syria, told reporters in New York IS "are good candidates for the list" of possible war crime indictees and he was looking into "perpetrators from all sides".

Syria's Al-Qaeda affiliate the Al-Nusra Front meanwhile released a video of a young suicide bomber from Florida who blew himself up at an army post in the northwest on May 25.

Moner Mohammad Abu Salha, alias Abu Hurayra al-Amriki, was believed to be the first American to carry out such an attack in Syria's war.

The Observatory also said six children and three women were among 15 civilians killed on Friday in rebel mortar fire on army-held areas of Aleppo city.

Once Syria's commercial capital, the northern metropolis has been divided into regime and rebel-held areas since July 2012.