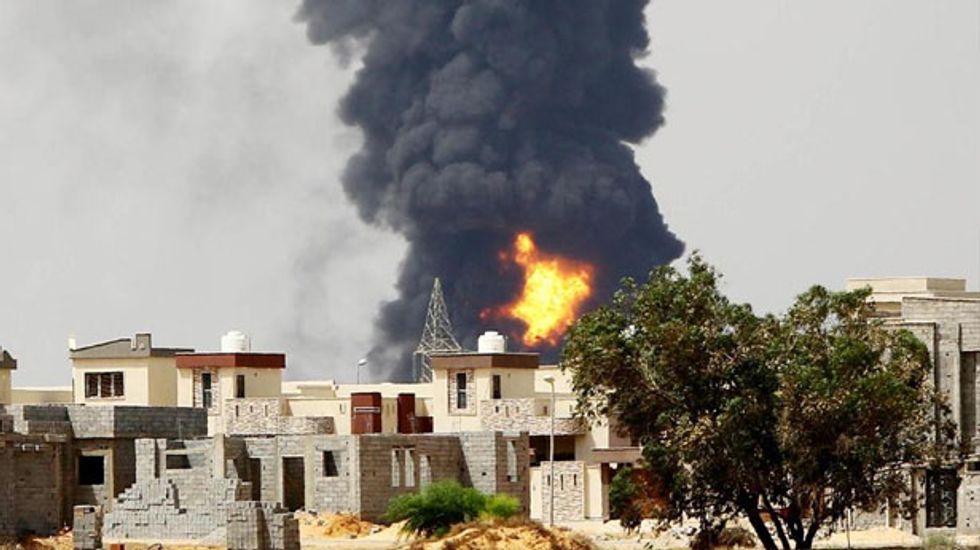 Islamist groups have seized the army special forces headquarters in Libya's Benghazi after days of fighting left at least 35 soldiers dead and plunged the country deeper into lawlessness.

An Islamist and jihadist alliance announced the capture of the main military base in the eastern city in a statement early Wednesday, which was confirmed by an army official.

Ansar al-Sharia, blacklisted as a terrorist organisation by Washington, published photos on Facebook of dozens of weapons and crates of ammunition it claimed its jihadists had seized from the base.

Libya's Red Crescent said it had recovered the bodies of 35 soldiers from the base.

"Up to now we have managed to recover 35 bodies. But there are more" to be found, Red Crescent spokesman Mohamed al-Misrati told AFP.

Fighting in Benghazi has claimed about another 60 lives since Saturday, medical officials in the city said.

"Special forces under the command of (Colonel) Wanis Abu Khamada withdrew after several attacks," said the army official after the biggest loss yet for the armed forces in their fight against the country's powerful militias.

The special forces are one of the units of Libya's regular armed forces that support rogue Libyan general Khalifa Haftar, but they have not placed themselves under his command.

Former deputy premier and MP Mustapha Abu Shagur was meanwhile freed by his kidnappers, hours after they snatched him from his Tripoli home on Tuesday, his family said.

The kidnapping highlighted the failure of authorities to rein in militias that sprang up during the 2011 uprising which overthrew long-time dictator Moamer Kadhafi.

"Doctor Abu Shagur has been freed. He is tired but in good health," his nephew Isam al-Naass told AFP.

Libya's recently elected parliament had been due to meet in Benghazi on August 4 but will instead hold an emergency meeting Saturday in the eastern city of Tobruk, a lawmaker said.

"In light of the dangerous situation in the country we decided to hold an emergency meeting in Tobruk," east of Benghazi, said Abu Bakr Biira, the MP who was due to preside over the inaugural session.

Amid rising lawlessness, several countries, including Portugal, the Netherlands, Canada and Bulgaria, evacuated citizens or closed their embassies in Tripoli earlier this week.

View gallerychecking passports at the naval base in Tripoli during …

A picture taken and released on July 30, 2014 by ECPAD shows members of France's crisis centre check …

France said on Wednesday it had temporarily closed its embassy while a French diplomatic source said 40 French nationals, including the ambassador, had been evacuated along with seven British citizens by sea.

The naval ship carrying them is bound for the southern French port of Toulon, the foreign ministry said.

A Filipina nurse was also briefly kidnapped by an unknown group and raped in the capital Tripoli, medics and security officials said. The health ministry said the incident could push Manila to hasten the evacuation of its citizens.

Tripoli airport has been closed because of fighting between rival militias seeking to control the facility, and a rocket on Sunday sparked a blaze at a fuel depot which was still burning on Wednesday, but with less intensity.

The blaze began in a tank containing more than six million litres (1.6 million gallons) of fuel and then spread to another fuel storage site.

An oil ministry official said on Wednesday efforts to contain the inferno "are continuing as necessary".

Libya has appealed for international help, but former colonial power Italy and Greece have said their involvement would be contingent on a halt to the fighting.

On Tuesday, the government again called for a ceasefire in the airport battle that has killed around 100 people and wounded 400 since July 13.

The clashes, the most violent since the 2011 revolt, started with an assault on the airport by armed groups, mainly Islamists.

The attackers are battling to flush out fellow former rebels from the hill town of Zintan, southwest of Tripoli, who have controlled the airport for the past three years.

World leaders on Monday called on the UN to play a greater role in "facilitating the political process" to restore stability to Libya.

Neighbouring Tunisia, where hundreds of thousands of people fled during the 2011 revolt, said Wednesday it would be unable to cope with another massive influx.

Foreign Minister Mongi Hamdi told a news conference in Tunis some "5,000 to 6,000" people a day "in recent days" were crossing the frontier.

"We will close the border if the national interest requires it," he said.