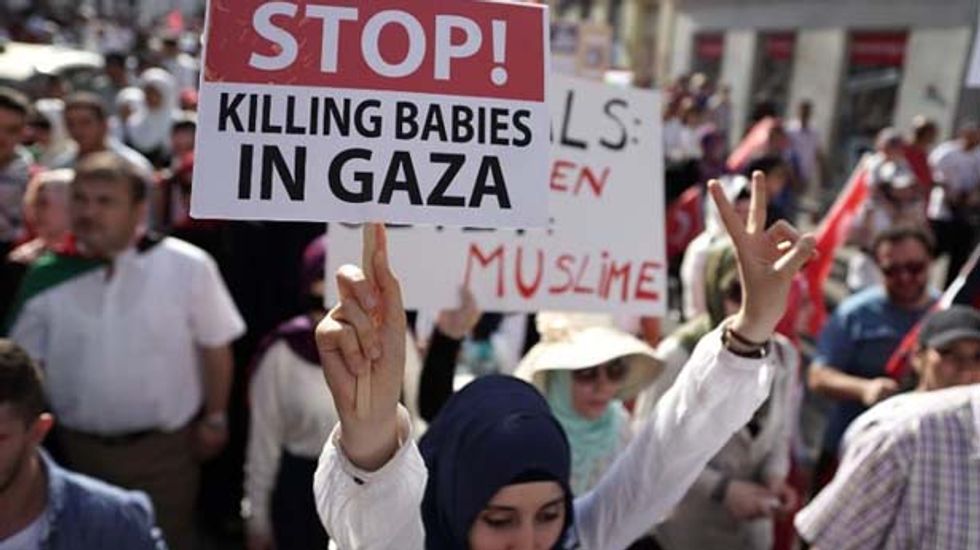 A French rally against the deadly Israeli offensive in Gaza once again descended into chaos Sunday as protesters looted shops and riot police lobbed tear gas and rubber bullets into the crowds.

The demonstration in the northern Paris suburb of Sarcelles is the third to have deteriorated in the space of eight days in a country that counts the largest Muslim population in western Europe and a huge Jewish community.

A decision by authorities to ban protests in areas deemed too sensitive has also garnered controversy as they took place anyway and turned violent, while authorised ones elsewhere in the country -- as well as in other cities across Europe -- were peaceful.

From Vienna to Stockholm and on to Amsterdam, thousands rallied on Sunday to oppose Israel's offensive, which has left more than 400 Palestinians and 20 Israelis dead.

Though patrolled by police, few incidents were reported in those demonstrations.

"We're not anti-Semites, we're here for the people. We call on Europeans and Americans to finally do something," organisers of the 11,000-strong march in Vienna said.

But in the Paris suburb of Sarcelles -- sometimes nicknamed "little Jerusalem" for its large community of Sephardic Jews -- a banned but orderly demonstration of several hundred descended into chaos when dozens of youth -- some of them masked -- set fire to bins and lit firecrackers and smoke bombs.

Others raided a drugstore which caught fire. Young girls grabbed baby milk inside.

"We're going to get the cash register," one person shouted, his voice drowned by the noise of a police helicopter overhead and the alarm of a nearby pizzeria.

Security forces then fired rubber bullets in the direction of the looters.

Not far away, riot police blocked access to the local synagogue, where a group of young men stood armed with clubs and iron bars -- one of them flying an Israeli flag.

The deadly bombing of Gaza has brought to light deep divides within French society -- a Jewish community increasingly concerned over anti-Semitism, a growing radical Islamic fringe, and far-left activists whose opposition to Israeli policies sometimes verges on anti-Semitism.

The violence in Sarcelles closely mirrored that of a rally Saturday in a northern district of Paris, when a protest that began peacefully spiralled out of control, leading to clashes with riot police and dozens of arrests.

Both rallies had been banned out of fear of unrest and amid concern that the Jewish community would be targeted after protesters last weekend tried to storm two synagogues in the French capital.

Some commentators in France, and the left-wing party which helped organise Saturday's march, railed against the ban, particularly as other protests in France and Europe took place without incident.

On Saturday, parts of central London were brought to a standstill as thousands marched against the Israeli offensive.

London saw both pro- and anti-Israel rallies on Sunday, but police kept demonstrators at a distance and no arrests were made.

Some 11,000 marched in central Vienna on Sunday to protest "the murder and oppression in Palestine".

"We're not anti-Semites, we're here for the people. We call on Europeans and Americans to finally do something," the organisers said at the start of the march.

Smaller protests of 500 to 600 people were also held in the Austrian cities of Graz and Linz.

In Amsterdam, they were some 3,000 marchers carrying signs including "Stop the war" and "Israel war criminals," an AFP correspondent said.

"It just has to stop. Children are being killed and they are innocent," said Ekrem Kara, 32, wearing a traditional Palestinian black and white keffiyeh scarf.

In Stockholm about 1,000 people protested.

France's Prime Minister Manuel Valls defended the decision to stop the Paris protest, saying the violence that unfolded "justifies all the more the brave choice by the interior ministry to ban a demonstration."

Speaking as he commemorated the anniversary of the Vel' d'Hiv Roundup -- a mass arrest of Jews in Paris on July 16 and 17, 1942 -- Valls warned of "a new form of anti-Semitism".

He said it was spreading "on the Internet, on networks, in working class areas, among young people who are often aimless, who have no awareness of history, who hide their 'hatred of the Jews' behind the facade of anti-Zionism and behind hatred of the Israeli state."

President Francois Hollande also hit out at anti-Semitism and racism Sunday, saying it would not be tolerated.

"The Republic is about being able to live together, to look at our history and at the same time to always be ready to defend democratic values, not to be influenced by arguments that are too far away from here to be imported, not to be swept away by global shock waves," he said.

Meanwhile, former French prime minister and leading right-wing politician Alain Juppe criticised the Israeli offensive, which he said was seeking to destroy Hamas but "mostly what we see is terrorised families caught in the trap of the Tsahal's bombardments".

On his blog, Juppe said he "does not understand the Israeli government's strategy", and called for an immediate truce.

On the US border, migrants' desperation outweighs fear

Selvin Allende is worn out. With his one-year-old daughter on his shoulders and his pregnant wife beside him, he crossed the Rio Grande from the Mexican city of Piedras Negras into Eagle Pass, Texas -- a dangerous journey that thousands of migrants undertake every year seeking a better future.

"I was afraid for my daughter in the river. I feel tired, defeated, but with the dream of working if the immigration services listen to us with their hearts," says the 30-year-old Guatemalan.