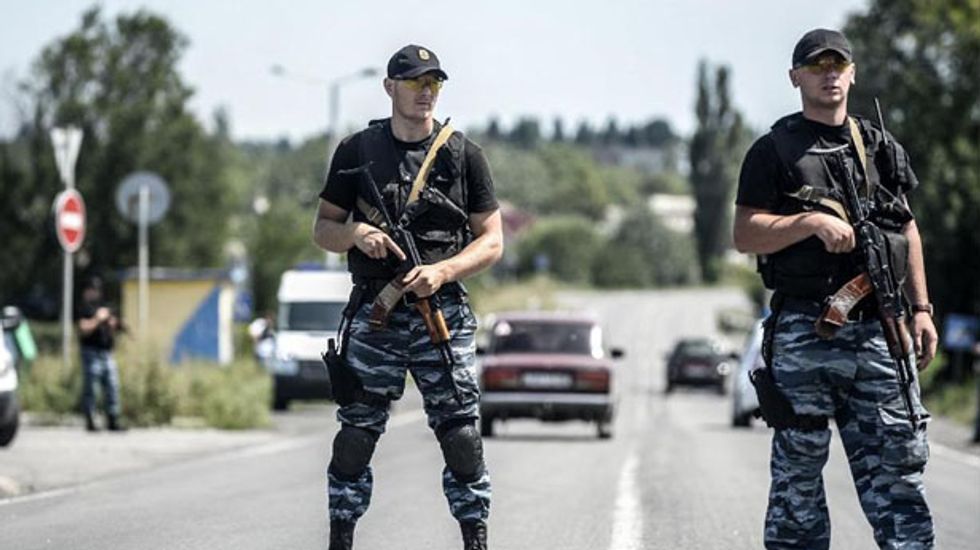 An international probe into the downing of flight MH17 in eastern Ukraine inched forward on Thursday as experts risked attack to reach the site for the first time in nearly a week after Kiev announced a halt to its military offensive.

A small team of Dutch and Australian experts accompanied by international monitors accessed the vast site of the doomed Malaysia Airlines jet after days of fierce fighting between government forces and rebels had stopped them reaching the area.

The Dutch justice ministry said the team was so far only a "reconnaissance" mission but would hopefully pave the way for more experts to visit soon.

In a sign of the continuing insecurity, an AFP team following some minutes behind the convoy heard loud blasts just a few kilometres away from the site and saw black smoke rising from a village close to where some of the plane wreckage is lying.

Ukraine's military had earlier announced a "day of quiet" across the entire east after a plea from UN chief Ban Ki-moon to halt fighting around the crash site, where the remains of some of the 298 victims lie festering in the sun two weeks after the jet was shot down over rebel territory.

Kiev has continually blamed pro-Russian rebels controlling the site for blocking the probe and warned that insurgents were still shelling its troop positions across the region. The rebels responded that Ukraine had not stuck to its truce.

On a visit to the Netherlands, Malaysian Prime Minister Najib Razak appealed for an "immediate cessation in and around the crash site by both Ukraine and separatist forces."

Ukrainian President Petro Poroshenko said Thursday's site visit went well and gave a guarantee that experts would be able to work daily at the scene from Friday in a phone call with the Australian and Dutch prime ministers, calling on rebels to respect a 20-kilometre (12-mile) ceasefire zone around the debris.

The West says the insurgents likely shot down the plane with a missile on July 17, but Russia and the rebels said it could have been blown out of sky by a Ukrainian jet.

Russia's aviation authorities said a team of their own experts had arrived in Kiev and were hoping to reach the crash site.

Meanwhile, negotiators from Kiev and Moscow began talks in the Belarussian capital Minsk. Past talks have proved unproductive and there was little hope for a major breakthrough despite Russian media reports that the rebels were also attending.

That came as lawmakers in Kiev ratified agreements with The Hague and Canberra that could see the two nations send some 950 armed personnel to secure the location where many of their nationals died.

However, Australian Foreign Minister Julie Bishop told journalists in Kiev that the pact was only an "insurance policy" and insisted there were no plans for officials to take armed forces to the crash site, wary of becoming entangled in a murky conflict that has claimed over 1,100 lives in more than three months of bitter fighting.

Despite the brief lull, the death toll has continued to climb, with Ukraine's army saying that 11 soldiers had been killed over the past 24 hours while local authorities said clashes in the rebel stronghold of Lugansk had left three civilians dead, including a five-year-old child, in the same period.

The rising toll comes against the background of fresh threats from the West that they could tighten the screws still further on Russia over its role in the Ukraine conflict.

A defiant Moscow has warned that fresh EU and US sanctions targeting its vital energy, arms and finance sector would backfire.

In Europe, concerns that tougher sanctions against Moscow could hurt the region's economy saw the continent's main stock markets fall on Thursday, with German sportswear giant Adidas warning its profits could be hit by worsening relations with key market Russia.

Some EU diplomats expressed concern that tighter sanctions may in fact embolden President Vladimir Putin, convincing him that he no longer has anything to lose by further escalating the Ukraine conflict.

NATO's top commander said on Wednesday that Russia had boosted the number of troops along the border with Ukraine to "well over 12,000" and that the figure was on the rise.

Lawmakers in Britain -- where a fresh probe into the radioactive poisoning of Russian spy Alexander Litvinenko is set to stoke fresh tension with Moscow -- warned NATO is not ready to deal with a military attack by Russia on a member state.