Obama pays up after jumping queue at Texas BBQ joint 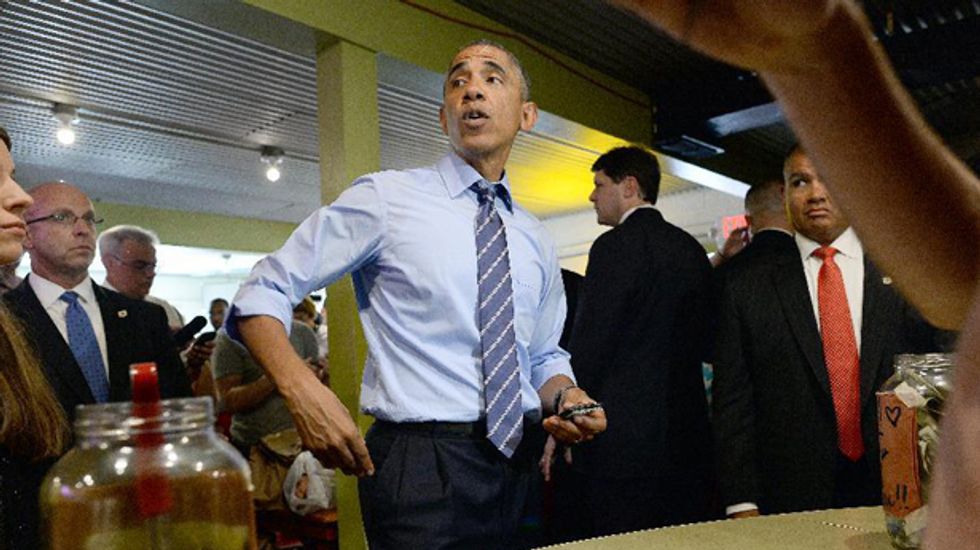 At Franklin's, a famed barbecue joint in Texas, pushing to the front of the line will cost you.

President Barack Obama learned this lesson the hard way on Thursday when he stepped into the meat-lovers paradise in Austin.

The line for food at the restaurant can reputedly sometimes be two or three hours. But the president -- exercising the prerogatives of his office -- apologetically jumped the queue.

He did however offer to stump up for lunch for the family next to him at the counter -- then got a shock.

"Hold on, how many folks are y'all feedin'?" the president quipped as Bruce Finstad of Houston and his daughter Faith, from Austin, taking advantage of their luck, ordered three pounds of beef, two pounds of ribs, a half pound of sausage and a half pound of turkey for their already seated family.

A bill that came to more than $300, and included lunch for Obama's staff, proved too much for the stash of $20 bills the president pulled sheepishly from his pocket.

So Obama settled the check with his credit card before making off with his smokey haul.

According to the website AustinEater.com, Franklin's is wildly popular -- but is often jammed with customers.

With a dash of political flair, the restaurant was running a poll by Thursday afternoon asking devotees whether Obama should have cut the line.

The president might be in the political doldrums, but this is one poll he won in a landslide as 145 people said his queue jumping was the right thing to do, as compared to 55 who said he should have waited his turn.

Obama later headed back to Air Force One to end a two-day swing through Colorado and Texas, part of his efforts to escape the political paranoia of Washington to hang out with "real" Americans.