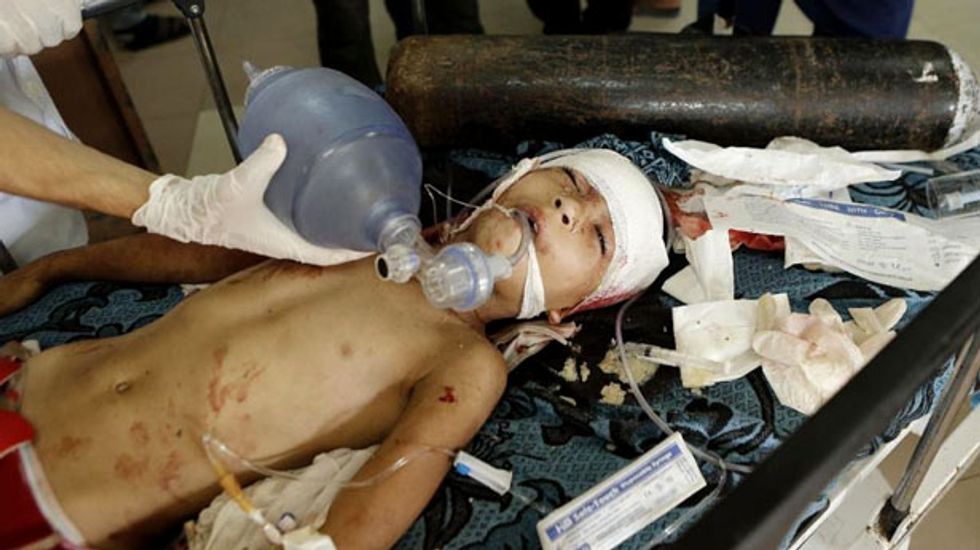 Exchanges of fire killed eight Palestinian children in a Gaza refugee camp and four people in Israel on Monday, shattering hopes for an end to three weeks of devastating violence.

The missile that slammed into a public playground in the seafront Shati UN refugee camp also killed at least two other people and wounded another 46, many of them also children, the emergency services said.

Soon after, a security source said five Gaza militants were killed in a shootout with troops in southern Israel. Hamas's armed wing claimed it killed 10 Israeli soldiers in a raid in the same area, and denied it lost any men.

The latest bloodshed pushed the Palestinian death toll from violence in and around the coastal enclave to more than 1,050.

Palestinian medical sources blamed the refugee camp killings on the Israeli military, with witnesses saying the missiles had been fired from a fighter jet.

"An F-16 fired five rockets at a street in Shati camp where children were playing, killing some of them and injuring many more," one told AFP.

Inside Shifa hospital, an AFP correspondent saw the bodies of at least seven children from the blast at the camp, with more bodies being brought in on bloodied stretchers.

They were unloaded and taken directly to the mortuary.

The Israeli military categorically denied any attack, and said Hamas had aimed the rockets at Israel but that they misfired and hit the camp.

It also blamed an early attack inside the compound of Gaza's biggest hospital on militant rocket fire that fell short of Israel and struck in the Palestinian territory.

In Israel, at least four people were killed when a mortar round fired from Gaza hit an administrative building in the Eshkol regional council, media reports said, in what was the biggest civilian loss of life inside the Jewish state since the start of the violence.

The latest deaths came after a brief lull in the fighting in Gaza for the beginning of the Muslim festival of Eid al-Fitr, torpedoing hopes of a ceasefire despite intense international pressure for an end to the conflict.

Following increasingly urgent calls by the UN and the US for an "immediate ceasefire," a senior source in the West Bank said Palestinian president Mahmud Abbas was heading to Cairo with Hamas representatives for fresh talks on ending the violence in Gaza.

"Abbas is forming a Palestinian delegation including Hamas and Islamic Jihad representatives to meet Egyptian leaders and discuss a halt to Israel's aggression against Gaza," the source told AFP, without saying when the talks would take place.

"The aim is to examine with Egyptian leaders how to meet Palestinian demands and put an end to the aggression," he said.

As diplomatic efforts intensified to broker an end to the bloodletting which has claimed over a thousand lives, both sides appeared to have settled into an undeclared ceasefire arrangement with the skies over Gaza mostly quiet.

Military spokesman General Moti Almoz described the calm as "an unlimited lull" but warned that the army was ready to resume its activity at any time.

The army said two rockets had struck Israel since midnight (2100 GMT) while in Gaza, an AFP correspondent confirmed there had been no overnight air strikes, although sporadic raids resumed in the afternoon with a four-year-old boy and another person killed by tank shelling near the northern town of Jabaliya.

Another three succumbed to their wounds overnight.

There was little mood for celebration in Gaza City as the three-day festival of Eid al-Fitr that ends the holy fasting month of Ramadan got under way.

Several hundred people arrived for early-morning prayers at the Al-Omari mosque, bowing and solemnly whispering their worship. But instead of going to feast with relatives, most went straight home while others went to pay their respects to the dead.

Among them was Ahed Shamali whose 16-year-old son who was killed by a tank shell several days ago.

"He was just a kid," he said, standing by the grave. "This is the Eid of the martyrs."

Obama's demand for an "immediate, unconditional" ceasefire has strained US-Israeli ties and put Netanyahu in a tight spot with hardliners in his government, commentators say.

And US Secretary of State John Kerry said Monday international efforts to agree a Gaza ceasefire must lead to the disarmament of Hamas.

It came after the UN Security Council appealed for both sides to accept an "immediate and unconditional humanitarian ceasefire" to permit the urgent delivery of aid, in a non-binding statement which elicited disappointment from the Palestinian envoy.