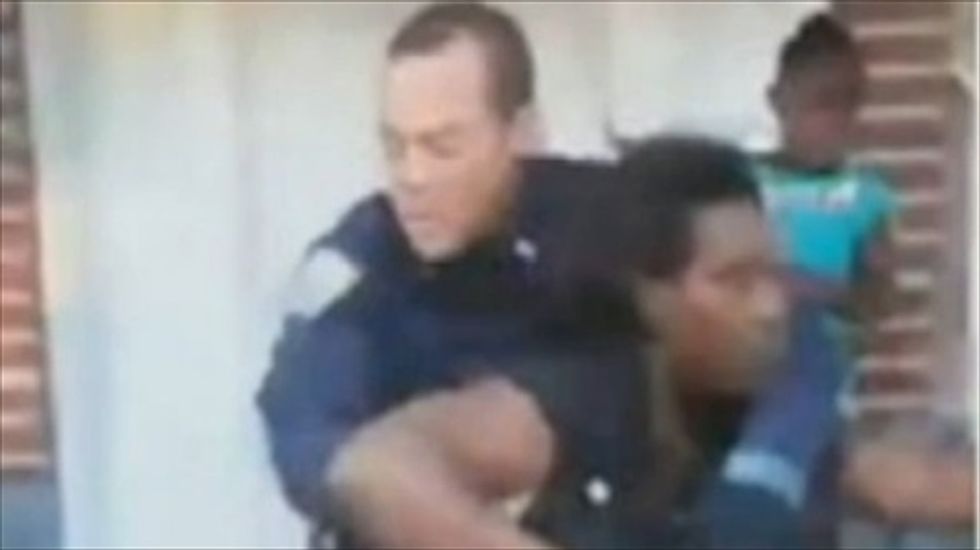 NEW YORK (Reuters) - A New York woman who is seven months pregnant complained on Monday that she was put in a chokehold by a New York police officer after barbecuing outside her home, fueling a controversy that has raged in the city following a man's death linked to the technique.

Rosan Miller, 27, told a news conference set up by civil rights advocates that she was in "a lot of pain," following the incident, which was recorded on cell phone video and shown to reporters. Miller said police questioned her and her husband, Moses Miller, 34, on Saturday for grilling outside their Brooklyn home before the scuffle took place.

"The community is traumatized," said former City Council member Charles Barron who stood beside Miller at the conference.

"And, all for what. All for what? Barbecuing?" he said.

The allegation comes days after a Staten Island man, Eric Garner, died in police custody after being put in an apparent chokehold by an officer during an arrest for selling untaxed cigarettes.

Chokeholds have been banned within the department for over two decades, but in recent weeks several videos showing police using the technique have surfaced prompting widespread outrage.

Miller's arrest was under review by the NYPD's Internal Affairs Bureau, police said. Police declined to give further detail on what specifically they were investigating.

Police said Rosan Miller was given a summons for disorderly conduct, while her husband and his brother, 29-year old John Miller, were arrested on misdemeanor counts of harassment and obstructing governmental administration.

Mayor Bill de Blasio, who came into office promising to mend frayed relations between police and the city's Black and Latino communities, addressed the growing controversy of NYPD chokeholds and expressed concern about Miller's case at a news conference on Monday.

"We've made clear, both the commissioner and I, what our view is on the use of chokeholds. And it's not acceptable under any normal circumstances. But I don't want to rush to judgment," de Blasio said.

Police said last week that they were probing the arrest of a man who said he was placed in a chokehold after walking past the turnstiles at a Manhattan subway station without paying a fare and refusing to show police his identification.

The Civilian Complaint Review Board said last week it had launched a comprehensive study on the 1,022 chokehold allegations against the police it received from 2009 to 2013.

Watch a story on the alleged choking, as aired on WNBC-TV on Monday, below.