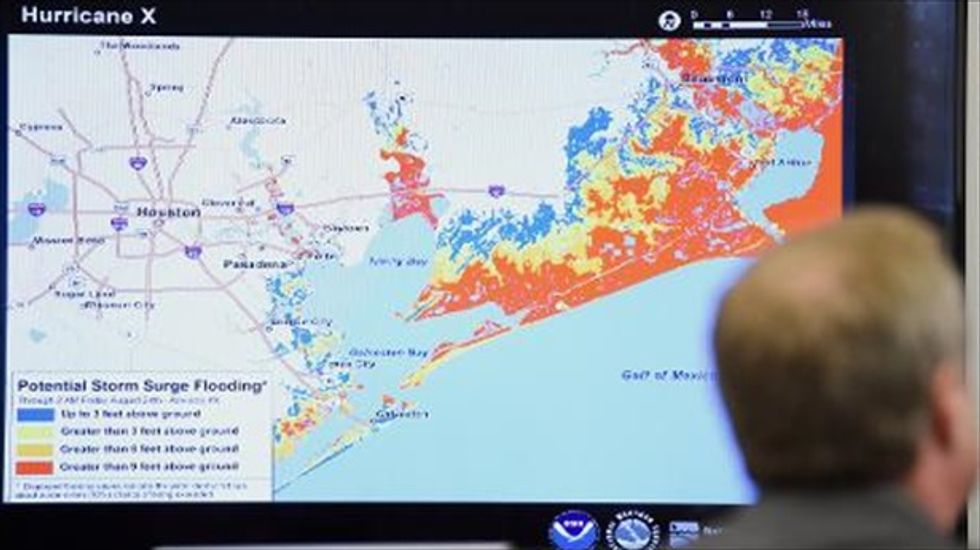 graphic is presented by NOAA of potential storm surge flooding in the Gulf Coast region as the agency issued the initial outlook for the 2014 Atlantic hurricane season on May 22, 2014 [AFP]

Stormy skies over the U.S. East Coast made for a red, white and blah start to the July Fourth holiday on Friday, threatening to wash out small-town parades, family barbecues and fireworks displays.

Despite the forecast, roads were expected to be jammed during the busiest summer travel holiday weekend, with 41 million people traveling 50 miles or more from home, the American Automobile Association (AAA) said.

That marks a 1.9 percent increase over the 40.3 million people who traveled this time last year, AAA said.

Travelers can be undaunted by the weather, even a Category 1 like Hurricane Arthur, experts said.

"People do try to err on the side of keeping their vacation plans in place. They want to go. They want to travel," said AAA spokeswoman Heather Hunter.

With the storm approaching, the resort town of Ocean City, Maryland pushed back its July Fourth fireworks display to Saturday. Further north, the famed Boston Pops Fireworks Spectacular was moved to July 3 from its traditional July 4 show.

In drier parts of the country, Americans readied for a day of family traditions such as ice cream eating contests, bake-offs and relay races.

Fireworks show organizers had 50,000 pounds of fireworks in New York, 16,000 pounds in Nashville and 15,000 pounds in St. Louis, according to a report in The New York Times.

Preparations for a fireworks show at a central Texas high school turned deadly on Thursday when a trailer carrying the explosives blew up, killing one person and injuring several others.