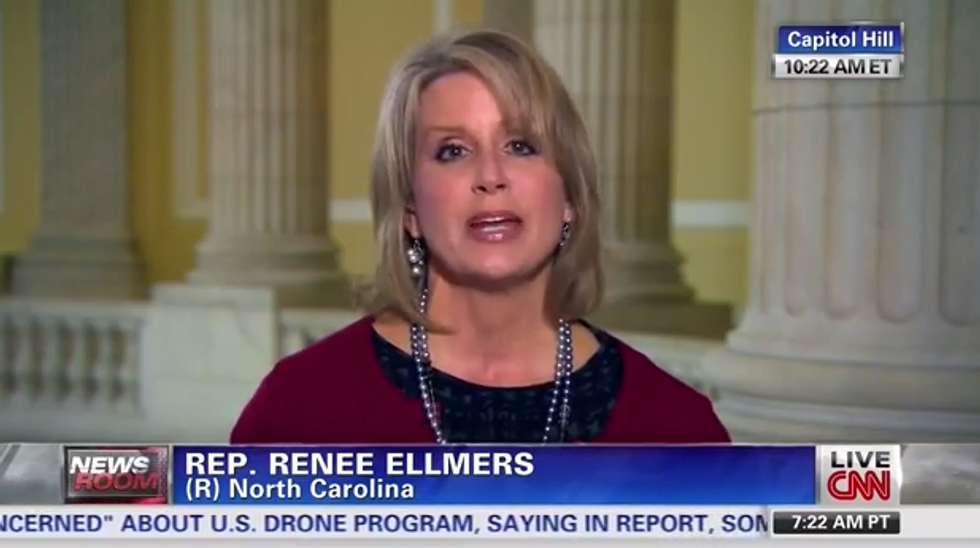 A North Carolina congresswoman believes that the Republican Party would make more headway with women voters if it could bring policy discussions "down to a woman's level."

According to Slate's Dave Weigel, Rep. Renee Ellmers was addressing "a Friday panel put on by the Republican Study Committee, the House's conservative caucus" when she made the remarks.

Washington Examiner reporter Ashe Schow was the only reporter present at the hearing, in which conservatives met with a group of GOP policymakers to strategize over ways to counter the charge that they are waging a de facto "war on women."

Ellmers agreed, "It’s how we are able to articulate ourselves -- make sure we get the point across that we care."

The problem, she said, is that male politicians are making the policy discussion too complicated for women to understand.

“Men do tend to talk about things on a much higher level,” Ellmers said. “Many of my male colleagues, when they go to the House floor, you know, they’ve got some pie chart or graph behind them and they’re talking about trillions of dollars and how, you know, the debt is awful and, you know, we all agree with that."

“We need our male colleagues to understand that if you can bring it down to a woman’s level and what everything that she is balancing in her life -- that’s the way to go,” she said.

Ellmers has been a vocal opponent of the Affordable Care Act, calling it the real "war on women," and complaining that by passing the Act, the Obama administration was "essentially saying it knows what’s best for you and your family."

"Women make many of their families’ health care decisions," Ellmers said in a press release. The federal government was stripping them of that role by way of the ACA, she insisted.

“If you want to talk about a ‘war on women,’" she said, "look no further than this health care law.”