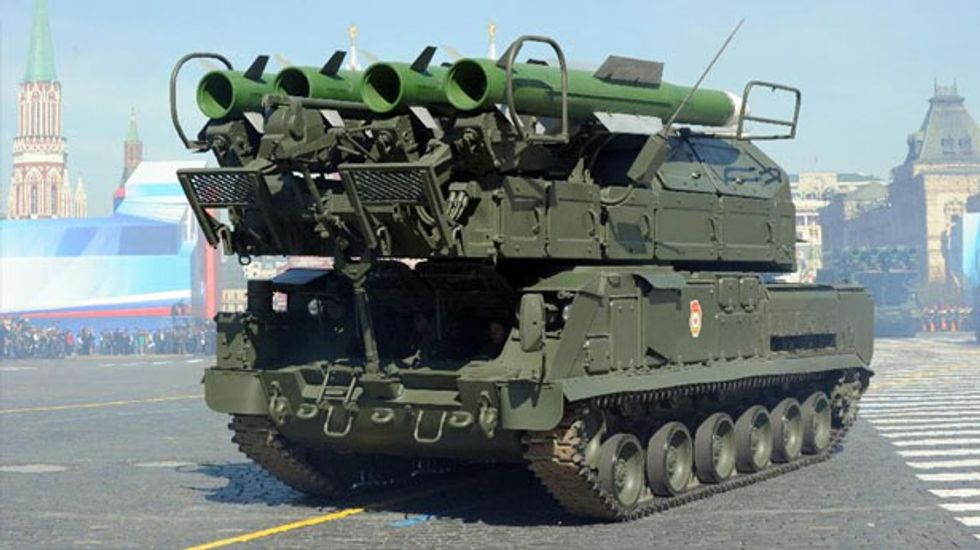 A Russian-made surface-to-air missile has emerged as the most likely cause of the suspected downing of a Malaysian airliner over Ukraine, analysts said on Friday, as claim and counter-claim swirl over who launched the weapon.

The vehicle-mounted "Buk" missile system is capable of soaring to the height of a civilian airliner like Malaysian Airlines flight MH17, unlike more widely available shoulder-launched weapons, defence experts said.

The Ukrainian and Russian militaries both use the device, but pro-Russian rebels in eastern Ukraine had just hours before the disaster announced that they had seized a number of Buk systems themselves.

"Who has shot it down? There is lots of evidence which shows these were pro-Russian separatists who have done that," Russian defence expert Igor Sutyagin of the Royal United Services Institute (RUSI) told AFP.

He cited a Twitter post on Thursday by separatists, later deleted, "when they reported that they had captured precisely that piece of hardware known as Buk".

Originally developed by the Soviet Union in the 1970s, the most modern version of the Buk missile has taken pride of place during recent Russian military parades on Red Square.

There are two variants: the Buk-M1 and Buk M2, codenamed by NATO as the SA-11 Gadfly and the SA-17 Grizzly.

The missile is produced by the Russian arms firm Almaz-Antey, recently targeted by US sanctions, at a factory in Ulyanovsk.

Buk missiles are complicated to operate, unlike shoulder-launched weapons, requiring three lorry-sized vehicles -- a command post, a radar vehicle, and a launcher with the missiles, analysts said.

The missiles themselves each weigh more than half a tonne and are about the height of two men.

Richardson said the missile system has a "friend or foe" identification system, but could not distinguish a commercial airliner from another unknown plane.

"It would not give you a warning that you were tracking an airliner," he said.

If it was a missile -- as Ukraine, the United States and others allege -- the question of where it came from and who fired it is key to the crisis.

Ukraine pointed the finger at separatist rebels, and if it was them they could have either captured it from Ukrainian forces, or have had them supplied by Russia, analysts said.

Two Ukrainian military planes were shot down in the weeks before the Malaysian Airlines jet crashed.

A message on the official Twitter account of rebel group the Donetsk People's Republic said on Thursday that insurgents had seized a series of Buk systems from a Ukrainian surface-to-air missile regiment.

Hours later, the group's "defence minster" Igor Strelkov on his local social networking page claimed to have downed what they said was a Ukrainian military transport plane. Both messages were later deleted.

Eliot Higgins, who posts detailed analyses of weapons in Syria and other conflicts on his Brown Moses blog, said he had traced a video of a Buk missile launcher about 12 kilometres (7.5 miles) from the crash site which was posted on Thursday.

"The video was uploaded on July 17th. I've found no other versions of it, and it was on a new YouTube account which was deleted a few hours later," he said in an email to AFP.

"Beyond that, there's no other way to confirm the date of the video. It's heading out of an opposition-controlled town, close to the town centre, heading south, which is towards the Russian border."

Jonathan Eyal, International Director at RUSI, said it was "impossible to believe" rebels could have hit their target without radar and other logistical support from the Russian military.

But Russia's defence ministry said Friday that a Ukrainian Buk radar was operating on the day of the crash.

Experts also pointed out the Ukranian forces themselves had accidentally shot down an airliner in a training exercise in 2001, killing 78 people.