Search for AIDS cure pushes ahead despite setbacks 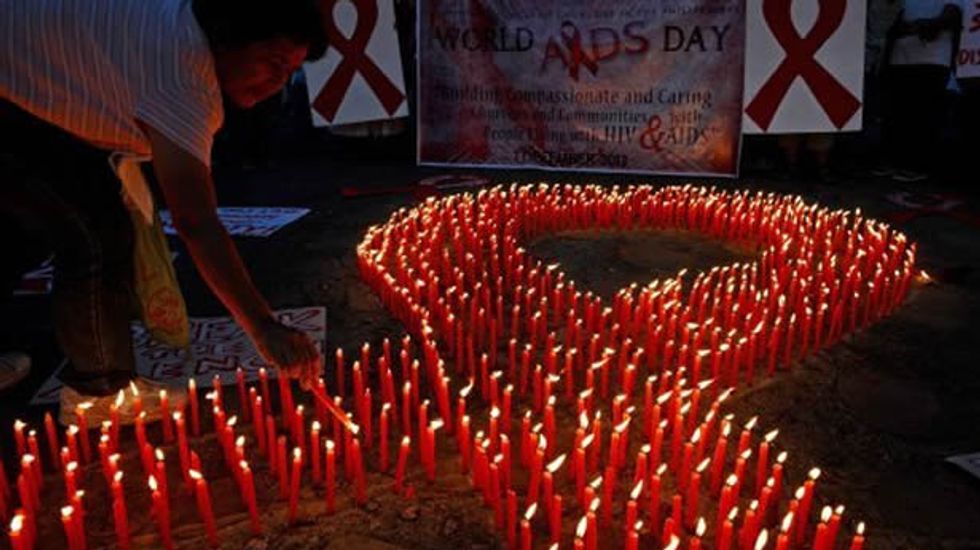 An AIDS activist lights candles placed in the shape of a red ribbon on World Aids Day in Manila on December 1, 2012 via afp

Scientists on Saturday vowed to press ahead with their quest for a cure for AIDS, despite losing a veteran colleague and suffering a setback in research.

Addressing a symposium on the search for a cure, Nobel prize winner Francoise Barre-Sinoussi said the death of Joep Lange, a frontline scientist in the 33-year war on AIDS, was a major setback.

"He was firmly believing that a cure for HIV was possible, as we all do," she said of the Dutchman, who was on the Malaysia Airlines Flight MH17 which went down over Ukraine.

"I am convinced that he, like the other members of the HIV community that were in that plane, would have encouraged us to go on."

Barre-Sinoussi, who co-discovered the human immunodeficiency virus (HIV) which causes AIDS, launched the cure campaign several years ago amid skepticism by some that the goal could ever be attainable.

Despite this, optimism has grown, and cure scientists are confident that they know a lot more about HIV.

After being beaten back by antiretroviral drugs, HIV retreats to a tiny number of cells in the body, holing up there as a safe haven, and becomes undetectable in the blood.

But if the drugs are stopped, the virus rebounds within a few weeks, infecting CD4 cells in the immune system and exposing the body once more to dangerous, opportunistic microbes.

The six-day International AIDS Conference in Melbourne, which starts Sunday, will hear more on Monday about the so-called "kick-and-kill" strand in cure research.

The objective is to pinpoint these reservoirs, flush out the virus with powerful drugs and then destroy it.

But a strategy that sparked hopes of a cure -- delivering a powerful dose of drugs at the earliest stage of infection -- has been dealt a blow.

The hopes centered on an American infant, known anonymously as "the Mississippi Baby", who was born with HIV. She was given drugs immediately at birth and the treatment continued for 18 months, when physicians lost track of her.

When doctors next checked her five months later, they found no sign of the virus.

In the run-up to the AIDS conference, though, it was discovered that after the child had lived 27 months without HIV and drugs, the virus had bounced back.

Jack Whitescarver, director of the Office for AIDS Research at the US National Institutes of Health, said "this really demonstrates that we are still in the early days" of research.

"We will continue to make cure research a high priority and use this information to move the scientific agenda forward," he added.

On Saturday, researchers at Australia's University of New South Wales said two men with HIV now had undetectable levels of the virus after receiving bone marrow transplants for cancer.

In one case, the patient had a successful transplant for non-Hodgkin's lymphoma. His donor had one of two possible copies of a gene that gives protection against HIV.

But in the second case, the man had a bone marrow transplant for acute myeloid leukaemia with a donation that did not have the gene protecting against HIV.

Until now, the only person considered to have been cleared of HIV was American Timothy Ray Brown, who had bone marrow transplants in 2007 and 2008. His donor had both copies of the gene that protects against HIV.

Brown was able to stop antiretroviral therapy and remains clear of the virus. However, when two patients in Boston had transplants without the gene mutation, the virus returned after antiretrovirals were stopped.

Sharon Lewin, a leading cure investigator at Melbourne's Monash University, said it was "very premature" to consider the latest research a cure.

"The patients are still on antiviral therapy, so you cannot say that a patient is cured of HIV until you've stopped the treatment," she said.

Millions of lives have been saved by the advent of antiretroviral drugs. Even so, around 35 million people around the world have HIV, a toll that mounts each year.

Wayne Koff, from the International AIDS Vaccine Initiative, said HIV was the most complex virus ever encountered by vaccine developers.

But recent progress in human trials and experiments on lab monkeys showed a vaccine "is possible", he said in an email exchange with AFP.