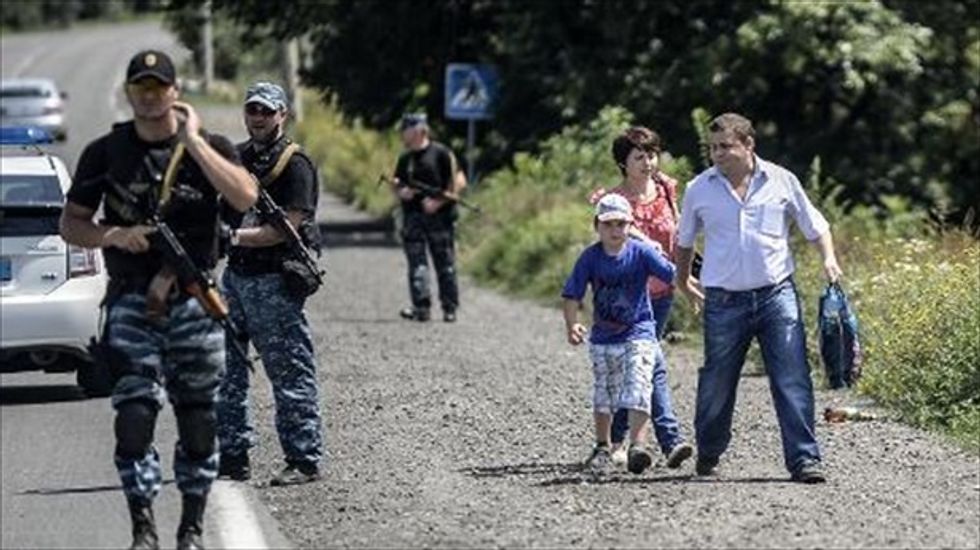 Sedove (Ukraine) (AFP) - With their sunburnt backs, flip-flops and baseball caps, the families lolling about the Ukrainian resort town of Sjedove on the Azov Sea could be mistaken for holidaymakers.

But they are all refugees, fleeing the deadly combat in east Ukraine as the fighting has escalated in recent days and come closer and closer to large cities.

The run-down hotels in the town, around 150 kilometres (93 miles) south of Donetsk, usually serve coal miners on holiday from the Donbass region, Ukraine's industrial heartland.

Now they are filled with some 1,200 displaced people escaping more than three months of clashes between pro-Russian rebels and Ukraine's army.

One temporary resident in the small two- or three-story hostels by the beach is Yulia, who fled the town of Snizhne near the crash site of downed Malaysia Airlines flight MH17.

"We decided to leave for our baby's sake," she said, as her one-year-old son Bogdan cried in her arms.

"Tanks were regular traffic where we were. There were armed men everywhere. We were very scared."

Sitting around her under a blue plastic shelter, more mothers with infants in their arms speak in agitated tones as older children run around the resort's overgrown footpaths.

Tricycles, mopeds and prams were parked outside the hotel.

Svitlana said she had spent two days and two nights hidden in the cellar of her home before she took the decision to leave.

"There were bombings and our neighbour's house was hit. It was impossible to sleep, to live in those conditions. It was a question of life or death," she said.

Lyudmila, who arrived a week ago from Lugansk, said: "In our town, only old people are left. We escaped as soon as we could. But leaving your home is not easy."

A canteen has been set up in another building, where clothes are also handed out to people who have left their homes in a hurry.

"We are giving out all the food and clothes given to us by humanitarian organisations," said Oleksandr Zagrodelny, who oversees the various centres for internally displaced people in the region.

In recent days, he has noted a sharp increase in refugees.

"We have no more space so we are having to put up several families in the same apartment," he said.

Despite the recent spike in numbers, the situation has been even worse.

Many people are now returning to their homes in areas once again under Kiev's control after a bloody recent push by the Ukrainian military.

A few weeks ago, most people here were coming from rebel-held Slavyansk and its surroundings.

Now many of the families in the area are from the major cities of Donetsk and Lugansk, still in the hands of the insurgents.

"Yesterday a bus with 40 people left for Slavyansk," said Valentina Ivanovna, who runs a hostel in the town.

"Now that the army has retaken the town they can return to their homes. Seeing them go back was an emotional moment," she said.

Her hostel currently hosts 150 people including 60 children, and those who have made it to Sjedove said they found some respite from the fighting.

But even here the sound of bombardment in the distance serves as a constant reminder that the war is far from over -- and Valentina is expecting more people to arrive.

"Unfortunately there is never any spare room for long," she said.