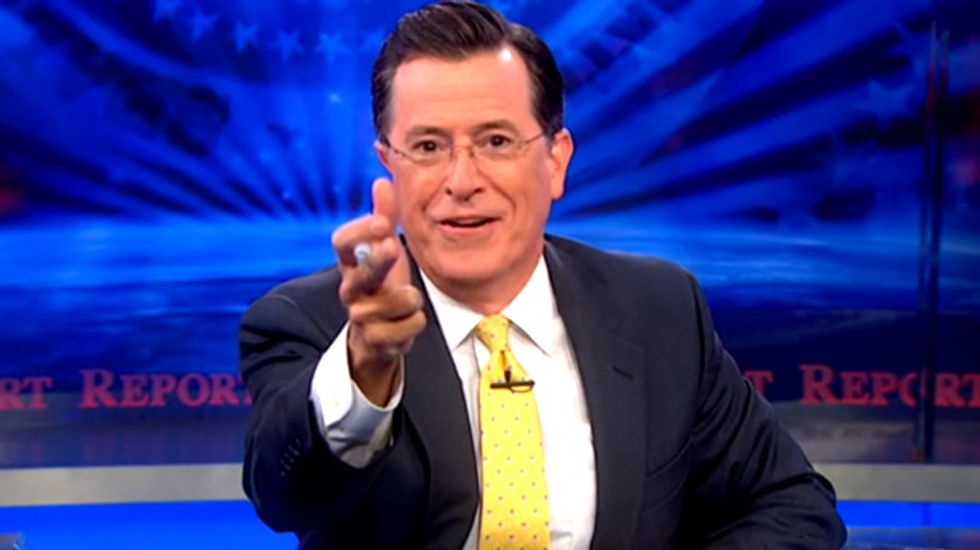 On the July 16, 2014 episode of The Colbert Report, Stephen Colbert discussed "the buffet of enticing options" the Republicans have to choose from in the 2016 presidential election.

"You got Curly Fries," he said of Rand Paul, "Beef Patty" of Chris Christie, "Mild" and "Milder Salsa" of Mark Rubio and Ted Cruz, and "Leftovers" of Jeb Bush.

"But my personal favorite," Colbert continued, "is Texas governor -- and cartoon version of a Texas governor -- Rick Perry." He then mentioned how in the last election, Perry "blew up" when it was revealed that his hunting camp had "a name my career will not allow me to say on television."

"But what really sank Rick Perry," he said, "was a debate gaffe that no one can forget -- except Rick Perry." Colbert then cut to a clip of Perry at the CNBC debate saying that there "are three agencies of government I would cut: Commerce, Education, and, uh, the third one -- the third one I can't, sorry. Oops!"

"'Oops!' of course," Colbert cut in, "was also the rallying cry of anyone who donated to his campaign." He then noted that Perry admitted to having been "high" on pain killers during the debate because of a back issue -- a back issue he's since corrected by no longer wearing cowboy boots.

Perry's decision to not wear cowboy boots, as well as another to don thick Clark Kent-like glasses, has come under fire from Texas conservatives like Land Commissioner Jerry Patterson. "I lament the fact that our governor could now pass for a West Coast metrosexual," Patterson said on July 1, 2014.

"Me-yow," Colbert said, stretching his hand like a cat's paw. "I don't know what a metrosexual is, but I'm guessing they don't say 'Me-yow.'"