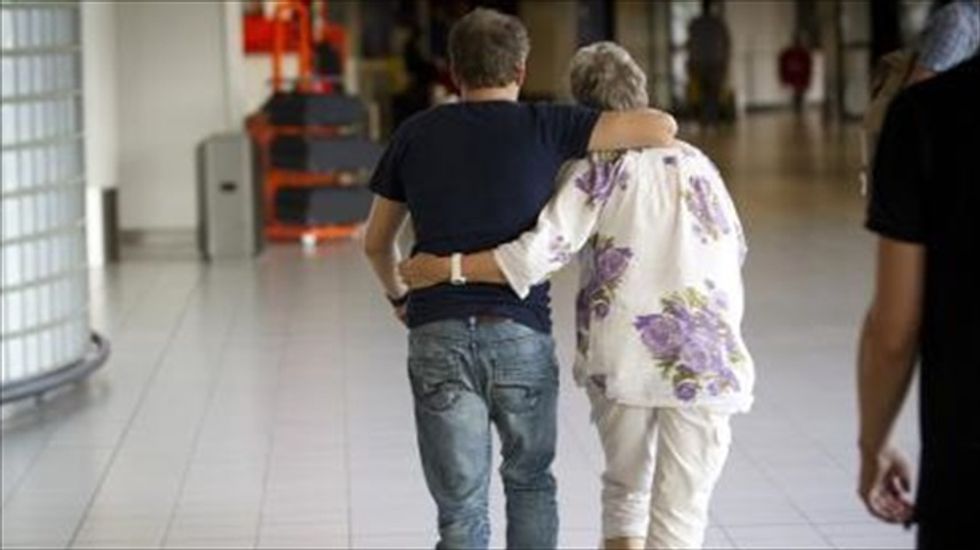 Schiphol (Netherlands) (AFP) - Distraught and sobbing relatives poured into Amsterdam's Schiphol airport as the nation reeled from the news 154 of its citizens were aboard a Malaysian plane believed to have been shot down in Ukraine.

Bewildered family members of those travelling on the ill-fated jet were whisked away into a restaurant on the upper deck of the airport, shielded from massing journalists.

They then boarded buses headed for an unknown destination.

Malaysian Airlines flight MH17 from Amsterdam to Kuala Lumpur disappeared from radar screens before crashing with 298 people on board in strife-torn eastern Ukraine.

Pro-Russian separatists in the region and officials in Kiev blamed each other for the crash, after the plane was apparently hit by a surface-to-air missile.

Red, white and blue Dutch flags were lowered to half-mast inside the country and at embassies around the world.

"I am deeply saddened by this horrible news," King Willem-Alexander said in a statement.

"Our thoughts go to the families, friends and colleagues of the victims, and to those who do not know yet if one of their loved ones was on board the plane."

Dutch Prime Minister Mark Rutte said he was "deeply shocked" by the catastrophe, while Justice Minister Ivo Opstelten added that "the images I saw were terrible."

Malaysian Airlines vice president Huib Gorter told a press briefing at Schiphol that a plane would take victims' relatives to Ukraine to visit the crash site if they wished to make the trip.

According to US Vice President Joe Biden, the Boeing 777 was "blown out of the sky" by what US defence officials strongly believed was a ground-air missile.

AFP correspondents at the scene of the crash in Ukraine reported grisly scenes of carnage with no trace of survivors.

Many were stunned by the news their family and friends were on the Malaysian airliner which went down just four months after a flight from the same carrier disappeared over the Indian Ocean with 239 people on board.

"This can't be true!" exclaimed Alicia de Boer in a Facebook comment as it emerged her friend Cor Pan, a young Dutchman, had been on the flight.

In a chilling post just before he boarded the flight, Pan posted an image of the doomed flight with the comment: "If it should disappear, this is what it looks like."

Cor Pan, who appeared to be going on a beach holiday to Malaysia, posted the photo as a joking reference to the missing Malaysia Airlines flight.

Comments by Pan's friends on Facebook suggested that he was on the MH17. Late on Thursday his picture had been shared more than 10,000 times on the social media site.

Petra Bleeker posted a picture of Cor and his girlfriend Neeltje Tol on which she superimposed a white rose, signifying death. It was unclear whether Tol was also on the flight.

"Such a beautiful couple who have been taken from life. I wish you the best wherever you are," said Peter Bootsman.

The crash resulted in the second biggest loss of Dutch lives in an airplane disaster, after a horrific 1977 crash of two Boeing 747 jumbo jets on the Canary Island of Tenerife that killed 238 Dutch nationals.

On Thursday, shocked passengers due to catch a later flight to Kuala Lumpur nonetheless said they were determined to make their trips.

"I'm going to board the plane. I'm sure the airlines are now taking precautions," passenger Asri Strankina told AFP.

Another who wished to remain anonymous said simply: "Lightning never strikes twice in the same place."