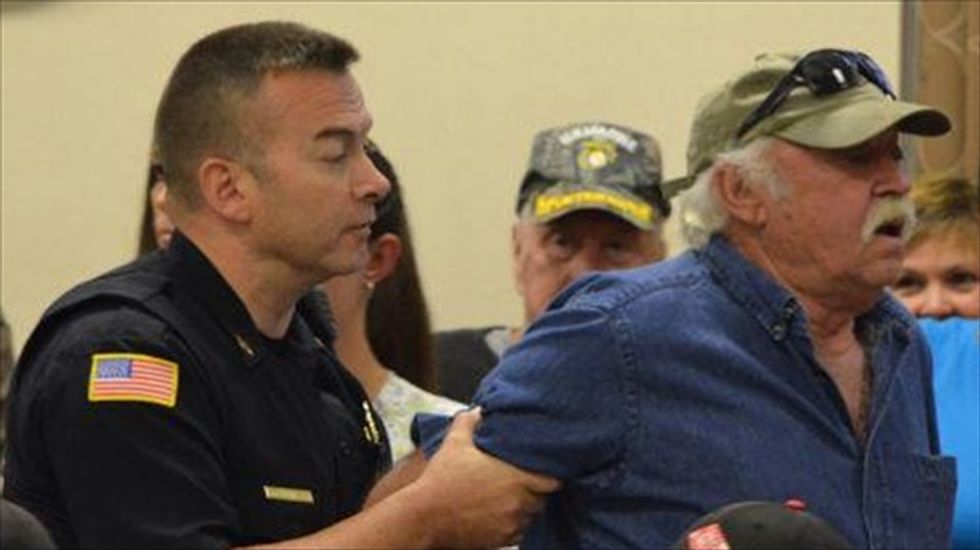 A 76-year-old man in Greeneville, Tennessee was arrested for asking a local official to speak louder during a public meeting amid a dispute over a proposed wastewater plant affecting their community, WATE-TV reported.

Eddie Overholt was charged with interfering with a public meeting and resisting arrest after being taken out in handcuffs from a meeting of the Greene County Industrial Development Board on Friday, His removal came on the order of County Mayor Alan Broyles.

Overholt was one of several people at the meeting who had planned to speak in opposition to a proposed wastewater disposal plant by U.S. Nitrogen that would involve installing a pipeline into the nearby Nolichucky River. The board was deliberating whether the company should be allowed to file a second application to the state Department of Transportation. U.S. Nitrogen's first application was rejected earlier this year.

But the Greeneville Sun reported on Monday that board members did not use microphones during the meeting, and some of them sat with their backs to the audience. The board also sat behind a rope barrier, with Greeneville Police Chief Terry Cannon standing between it and the audience.

Broyles reportedly warned the audience to remain quiet during the board's discussion or risk being thrown out. At one point, his request for the crowd not to applaud was interrupted by laughter, prompting him to repeat his warning.

"Would you all speak up until the whole audience can hear what you say?" Overholt then reportedly asked Broyles. The mayor responded by ordering officers to take Overholt out of the building.

"It's a public hearing," said Overholt, a member of Save the Nolichucky, an advocacy group formed to protest the proposed pipeline.

Overholt was released on bail on Friday and arraigned on Monday. He is due back in court on Sept. 22. He said in a statement on Save the Nolichucky's Facebook page that the officer who led him out of the meeting became "agitated" when Overholt asked for his name.

"He told me his name was Dixon or Hixon, and very abruptly increased the pressure and lift on my right arm, pulling my shoulder up into a very painful position, causing me to walk very awkwardly," Overholt said.

Watch WATE's report on the dispute, as aired on Friday, below.