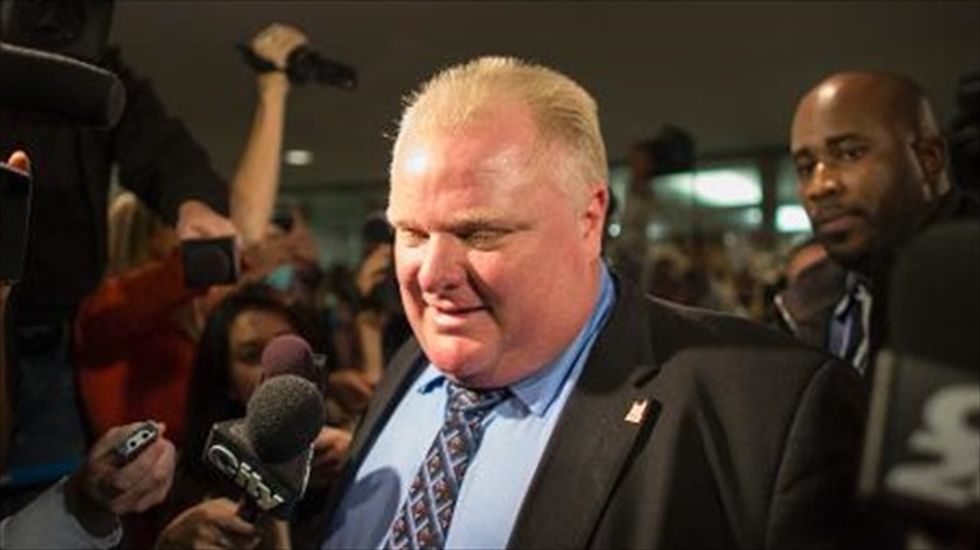 Toronto Mayor Rob Ford is surrounded by the media as he leaves his office at Toronto City Hall on Nov. 15, 2013 [AFP]

Toronto's crack-smoking Mayor Rob Ford is in a dead heat with two other contenders in the Canadian city's upcoming municipal election, according to a new poll released Wednesday.

The latest survey of voters's intentions by Forum Poll showed Ford has held onto his core support of 27 percent, despite revelations that he smoked crack while in office, and a two-month break from campaigning to enter rehab.

"It appears that Rob Ford is not going away anytime soon, but neither has he been able to maintain his pre-rehab levels of popularity, even among the demographic groups we know are sympathetic to him," Forum Research president Lorne Bozinoff said in a statement.

Bozinoff noted that many voters continue to demand Ford's resignation, suggesting he is not likely to see any gains in support.

Meanwhile, support for Chow has plummeted since the start of the campaign.

The polling firm surveyed 1063 randomly selected Torontonians on July 21. The results are considered accurate within a margin of three percent.

The Toronto election is scheduled for October 27.

Before the pandemic, a typical commute may have involved choosing between walking, driving or taking public transit. Ride-sharing apps have also allowed us to request rides in a shared car, on a bike or even using a scooter. Walking might involve a journey that begins on a residential street and travels through bustling commercial strips, past cyclists and delivery drivers that would need to be dodged and manoeuvering through busy intersections.

The pandemic altered the commute for most and changed our experience of moving through cities. Municipalities have been installing bike lanes, reducing car lanes and parking, widening sidewalks and green spaces and creating space for electric cars.

The Donald Trump adviser who was arguably responsible for both of the former president's impeachments could be the most valuable witness to investigators in Georgia, where the former president pressed state officials to help him overturn his election loss.

Rudy Giuliani was among eight Trump allies who were subpoenaed by a special grand jury in Fulton County as part of district attorney Fanni Willis' investigation into the twice-impeached former president's phone call to secretary of state Brad Raffensperger, and the former New York City mayor could provide the most damning evidence, according to MSNBC columnist Hayes Brown.