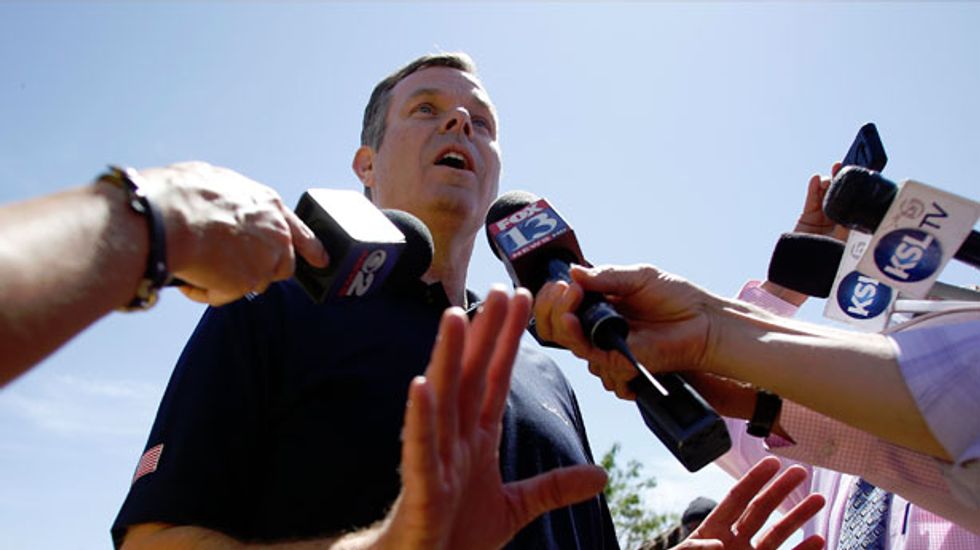 SALT LAKE CITY (Reuters) - FBI agents arrested two former Utah attorneys general at their homes on Tuesday and charged them pair with felonies stemming from a two-year investigation into claims of bribery and corruption, prosecutors said.

Republicans John Swallow and Mark Shurtleff are accused of establishing a pay-to-play culture in office, and of taking bribes to look the other way or offer protection when donors to their political campaigns ran into legal trouble.

"This has been a complex, nuanced, large investigation and there are multiple players in it," Salt Lake District Attorney Sim Gill said at a news conference. "We have filed what we think are appropriate charges. We could have filed more."

Both men deny any wrongdoing. They were booked into Salt Lake County jail and released by midday.

Swallow told reporters outside he would clear his name.

"I absolutely maintain my innocence. I look forward to being able to confront my accusers and to have my day in court," he said.

Shurtleff planned to hold a news conference later. Messages left for both men's attorneys were not immediately returned.

Shurtleff was Utah's attorney general for 12 years, leaving office in 2012. He hand-picked Swallow to serve as his chief deputy and then backed Swallow in the 2012 election to be his successor.

Tuesday's arrests in the Salt Lake City suburb of Sandy were carried out by the FBI and agents from Utah's Department of Public Safety. FBI agents searched both homes last month.

Shurtleff and Swallow were the subject of a 2013 investigation by the U.S. Department of Justice's Public Integrity Section.

That office declined to bring charges but FBI agents who worked on the case are working with Gill and Davis County Attorney Troy Rawlings, who pursued the investigation together.

Seven of the charges are second-degree felonies and carry a punishment of up to 15 years in prison. The remaining are third-degree felonies, which are punishable by up to five years.

Gill said the investigation remains active and more charges could be brought.