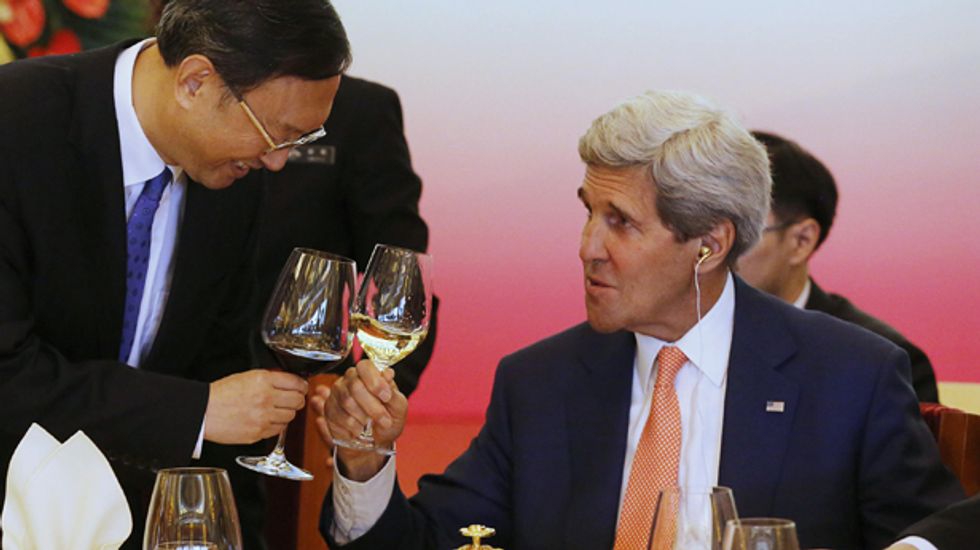 The deals, which involve companies and research bodies, were signed in Beijing ahead of a two-day visit to China by top Obama administration officials, including Secretary of State John Kerry, Treasury Secretary Jack Lew and Energy Secretary Ernest Moniz.

Under the pact, Huaneng will share information with Summit Power, which is expected to soon break ground on a similar project in Texas after it secures engineering and procurement support from Petrochina and Chinese engineering firm Huanqiu Contracting and Engineering.

The MOU is expected to be signed on Wednesday in Beijing.

Summit, in turn, will share information and technology for recovering oil from captured carbon.

"This (pact) accelerates sharing of information on carbon capture and storage for power," said Julio Friedmann, deputy assistant Secretary for Clean Coal for the U.S. Department of Energy.

The partnership will be a boon to both countries, said Laura Miller, a former mayor of Dallas who now manages the Texas Clean Energy Project.

"We will be sharing expertise, years of development experience and non-proprietary technology on both projects, all while making giant steps forward for the world's environment," she said in an interview.

Another project partners West Virginia University with Yanchang Petroleum on an industrialized demonstration of ultra-cleaning technology in northern Shaanxi province.

The University of Kentucky, another coal state university, will partner with Shanxi Coal International Energy Group and Air Products and Chemicals Inc on a project feasibility study for a 350MW supercritical coal-fired power plant that can capture 2 million tonnes of CO2 a year.

At a news briefing in the Chinese capital on Wednesday, the NDRC's Xie welcomed the closer partnership of the world's top two CO2 emitters, but said more was needed in areas such as technological cooperation.

"Developing countries are most concerned that they get funds and technological support from developed countries," he said. "On this issue, we are still having great difficulties and we have to put forth more effort."

China has led the way in trying to persuade developed countries to set up financing mechanisms to help poorer nations cut emissions and adapt to climate change.

The issue remains a major stumbling-block in talks on a new global accord, with the United States and others reluctant to commit funds.

Xie told Chinese media on Tuesday that wider two-way talks would include a special high-level meeting on climate change, focused on discussing domestic and international policies and possible cooperation.

The U.S. delegation is in China for the sixth round of the U.S.-China Strategic and Economic Dialogue, which are high-level meetings on cooperation in areas from security to agriculture.