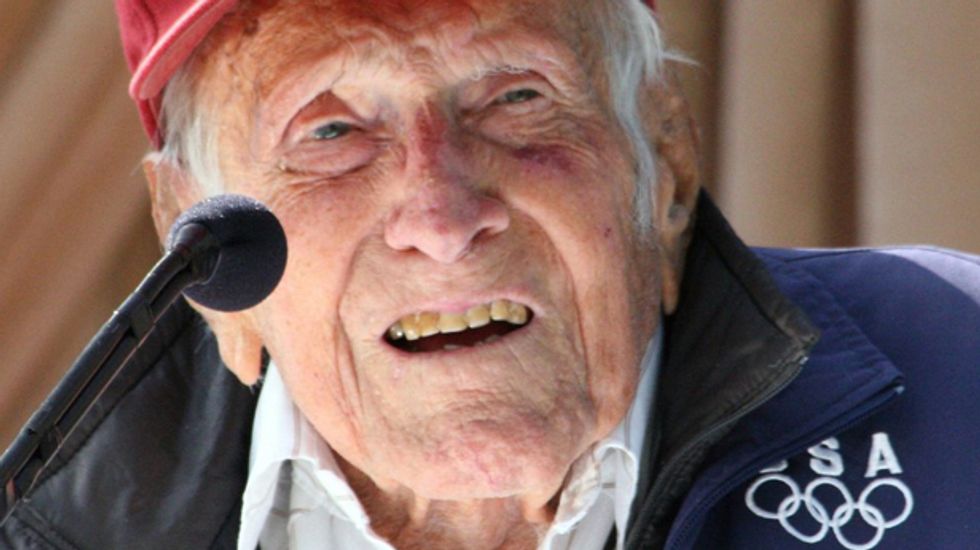 Louis Zamperini, an American prisoner of war in World War Two and Olympic runner whose life inspired the book and upcoming feature film "Unbroken," has died at age 97.

Zamperini died after a 40-day bout with pneumonia, his family said on Thursday in a statement released by Universal Pictures, the studio behind the film.

"It is a loss impossible to describe," said Angelina Jolie, who is directing the film. "We are all so grateful for how enriched our lives are for having known him. We will miss him terribly."

The film, which is to open Dec. 25, is based on the best-selling 2010 book "Unbroken" by author Laura Hillenbrand on the life of Zamperini, particularly the harrowing time he spent as a prisoner of war under the Japanese.

An American-born son of Italian immigrants, the Southern California athlete surpassed more experienced runners to qualify for the U.S. team for the 1936 Olympics in Berlin. He ran the 5,000-meter race, finishing eighth, but with a fast final lap that drew a personal compliment from German leader Adolf Hitler.

"His fighting spirit was a true representation of Team USA and our country, both in Berlin and throughout his life," the U.S. Olympic Committee said.

After the 1940 Olympics were canceled due to war, Zamperini enlisted as a U.S. Army airman and began flying missions as an officer and bombardier over the Pacific in late 1942.

In 1943, his plane crashed into the ocean and he spent 47 days in a life raft battling sharks, with only a scarce supply of water and food, with a fellow survivor before they were picked up by a Japanese boat.

For two years, until the war ended, Zamperini was held by the Japanese at camps where beatings, starvation and hard labor were common.

"Louis was truly one of a kind," Universal Pictures said. "He lived the most remarkable life, not because of the many unbelievable incidents that marked his near century's worth of years, but because of the spirit with which he faced every one of them."

Zamperini had been active up to this year, doing television appearances early in the year with Jolie for the movie.

In May, Zamperini was named grand marshal of the 2015 Rose Parade, in Pasadena, California.

Parade organizers Tournament of Roses indicated that Zamperini will be honored as the marshal despite his death.

"We will remember and honor the courage and grace that made Louis who he was, and hope that by sharing his life's story, we can uphold the values which built his strength, perseverance and his ability to forgive others," the organization said in a statement.