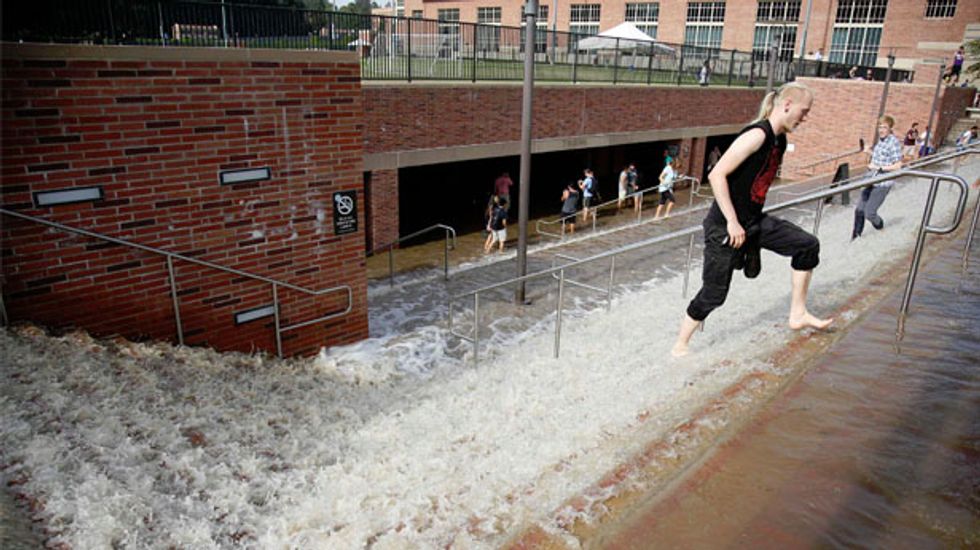 LOS ANGELES (Reuters) - A major water main ruptured underneath a street near the University of California, Los Angeles on Tuesday, unleashing a 20-foot-tall geyser and millions of gallons of water that flooded part of campus and stranded motorists on nearby streets.

The water gushed across the north end of the campus for several hours, submerging athletic fields and pouring into an underground parking structure, where motorists were caught in water up to their wheel wells, Los Angles Fire Department spokesman Brian Humphrey said.

The deluge happened as California suffers through a record drought that has prompted state and local authorities to impose water-use restrictions on residents, such as fines for wasting even a few gallons on excessive lawn-watering.

Humphrey said there were no injuries reported in the flooding but that fire department swift water rescue teams were on scene as a precaution and that crews helped drivers caught in the mud and flowing water.

He said the athletic fields and possibly some classrooms would likely suffer water damage, although it was too early to estimate.

Television images showed students wading through knee-deep water as the geyser continued to pour water onto nearby Sunset Boulevard. Firefighters placed sandbags outside classrooms and helped drivers stuck in water and mud.

Workers were removing inches of standing water from the floor of the UCLA basketball team's Pauley Pavilion, which in 2012 underwent a multi million-dollar renovation, university spokesman Ricardo Vazquez said.

The pipe was shut off some four hours after the rupture and about eight million to 10 million gallons of water had been lost, the city's Department of Water and Power (DWP) said.

The break happened around 3:30 p.m. local time. By 6 p.m. the geyser had subsided substantially but water was still pouring from a gaping hole in the asphalt.

No customers were without water and water quality was not compromised, the DWP said.

Sunset, a major thoroughfare through the city's west side, was shut down in both directions, jamming traffic during the afternoon rush-hour commute.

The more than 90-year-old riveted steel pipe carries an estimated 75,000 gallons per minute, the DWP said.

It said workers had to shut down multiple valves that would stop the water from flowing from the 30-inch main without breaking any nearby pipes. Repairs would continue through Wednesday.