Ukraine jets downed near MH17 site by 'missile from Russia' 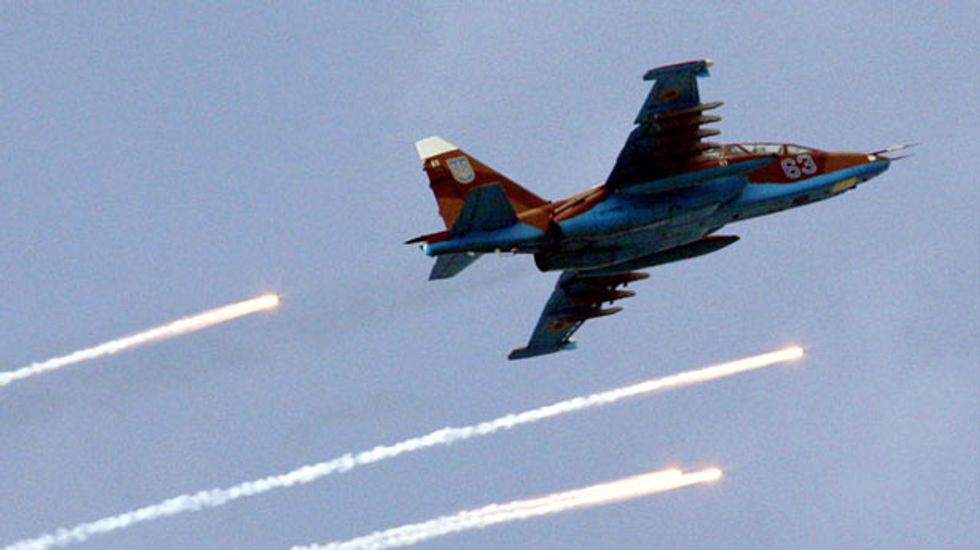 "According to preliminary information, the rockets were launched from Russian territory," Kiev's National Security and Defence Council said in a statement.

The planes came down close to the village of Dmytrivka, some 45 kilometres (25 miles) south-east of the MH17 crash site towards the Russian border, as they were providing air support for government infantry, the statement said.

The security council added that the Su-25 jets were flying at an altitude of 5,200 metres.

Pro-Russian rebels have insisted on several occasions that they were not equipped with weapons capable of hitting targets above an altitude of 2,500 metres.

However, a spokesman for the self-proclaimed Donetsk People's Republic told AFP its fighters had shot down the two aircraft.

An AFP crew trying to reach the scene were turned back by rebels who fired shots near their car some 10 kilometres from Dmytrivka.

The press office for Kiev's military campaign against the insurgents had earlier blamed "pro-Russian bandits" fighting in Ukraine for downing the jets.

The pilots from both jets managed to parachute out, it said, giving no further details about their condition.

The downing of the government jets comes just six days after the insurgents were accused of shooting down the Malaysian passenger plane using a surface-to-air missile, killing all 298 people on board.

Pro-Russian rebels battling government troops in the east had previously taken out a string of Ukrainian military aircraft during their 15-week insurgency.

Kiev alleged last week that an airforce transport plane was shot down from across the Russian frontier while another Su-25 jet was gunned down by a Russian plane.

The rebels have denied that they attacked flight MH17 as it flew at some 10,000 metres, accusing the Ukrainian military of being responsible for hitting the jet.

The latest incident came after a ceasefire was declared by both sides in the immediate vicinity of the Boeing 777 crash site, where Malaysian experts and international monitors were examining the airliner's wreckage on Wednesday.

Earlier, the first 40 bodies recovered from MH17 were flown out of the government-held city of Kharkiv bound for Eindhoven in the Netherlands.