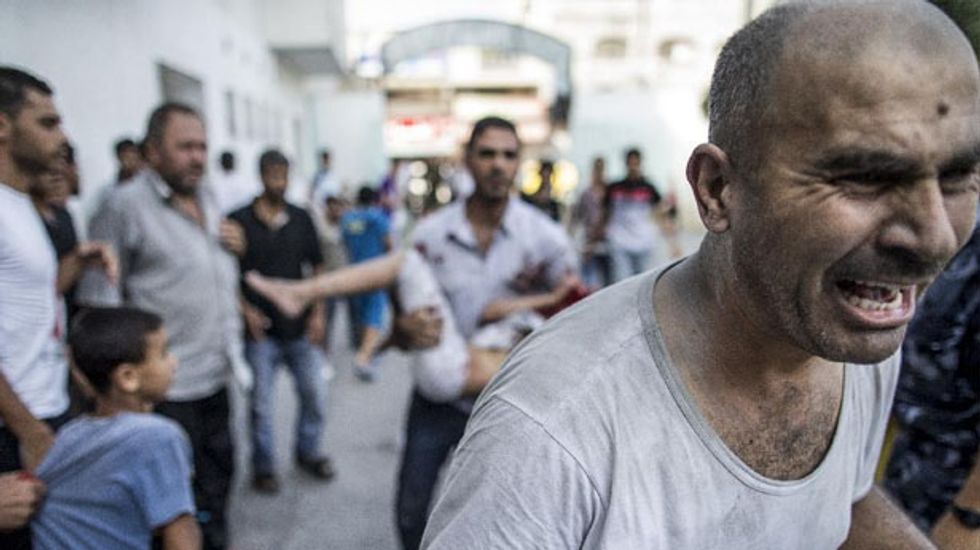 "There seems to be a strong possibility that international law has been violated, in a manner that could amount to war crimes," Pillay told an emergency session on Israel's Gaza offensive at the UN Human Rights Council, citing attacks that have killed Palestinian civilians, including children.

She said Israelis also had a right to live without constant fear of rocket attacks.

"Once again, the principles of distinction and precaution are clearly not being observed during such indiscriminate attacks on civilian areas by Hamas and other armed Palestinian groups," she said.

The council -- which is the United Nations' top human rights forum -- was poised to call for an international inquiry into Israel's offensive in the Palestinian territories.

He said residential areas had been flattened, with 2,500 houses destroyed and medical centres targeted.

"What Israel is doing is a crime against humanity," he said.

The meeting was called by Arab nations and fellow members of the Organization of the Islamic Conference.

"Their Pavlovian instinct demands they react against Israel, in order to divert attention from their own human rights violation," he told the council.

"Hamas is committing war crimes when it fires rockets indiscriminately at Israel towns and villages. Hamas is protecting its launching sites with the civilian residents of Gaza. Another war crime," he said.

"And this council sits in judgement of Israel? There can be no moral symmetry between a terrorist aggressor and a democracy defending itself," he added.

"However, the Gaza residents are not our enemies. Israel is fully committed to international law," he said.

He blamed Hamas for the situation facing Gaza residents.

"Israel deeply rejects any civilian losses caused by its operation, and has already started investigating itself. We do not confront the Salvation Army but a brutal terrorist organisation," he said.

The council was set to vote on a resolution lodged by the Palestinians -- which have observer status at the UN -- condemning "the widespread, systematic and gross violations of human rights and fundamental freedoms" since Israel launched its offensive last month.

The aim, it said, was to "establish the facts and circumstances of such violations and of the crimes perpetrated and to identify those responsible, to make recommendations, in particular, on accountability measures, all with a view to avoiding and ending impunity and ensuring that those responsible are held accountable, and on ways and means to protect civilians against any further assaults".

It also called for the "immediate International Protection for the Palestinian people" and requested that Switzerland, as guardian of the Geneva Conventions governing conduct in warfare, organise an urgent conference on the situation in the region.

The Gaza offensive, which marks the worst Israeli-Palestinian violence since two spikes in conflict in 2009 and 2012, has already claimed the lives of 639 Palestinians, most of them civilians, and 31 Israelis.