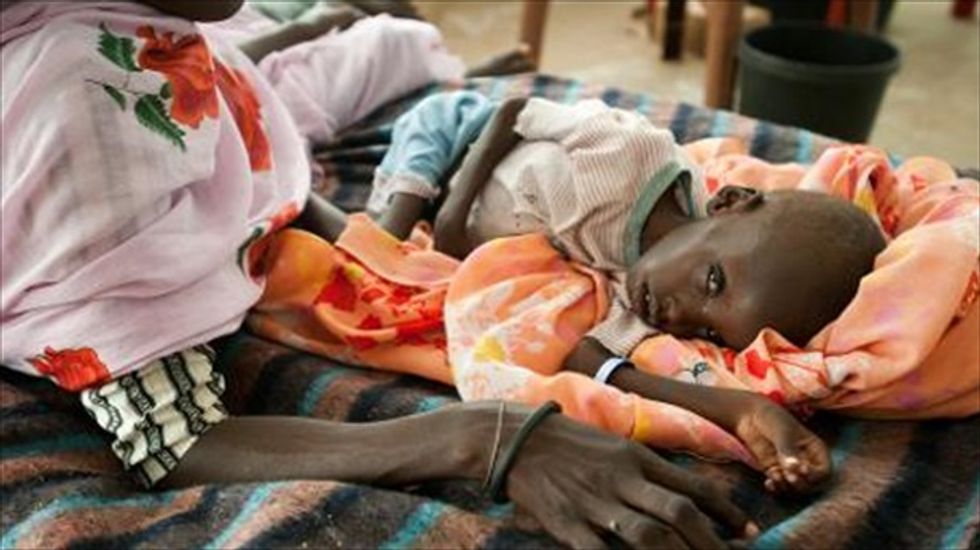 A malnourished child being treated in a clinic set up by Doctors Without Borders (Medecins Sans Frontieres) in Jamam, Upper Nile State, South Sudan on June 20, 2012 [AFP]

op UN aid chiefs have begged donors to increase efforts to stave off looming famine in South Sudan, where a third of the population are in crisis after months of war.

"They fear the world is allowing a repeat of what occurred in Somalia and the Horn of Africa just three years ago; when early warnings of extreme hunger and escalating malnutrition went largely unheeded until official famine levels were announced," the statement read.

Without swift action, 50,000 children could die from malnutrition this year, they added.

"The world should not wait for a famine to be announced while children here are dying each and every day," top UNICEF director Anthony Lake said.

The UN Security Council said Friday the food crisis is now the worst in the world, as it called on countries who had pledged 618 million dollars in aid to make good on their promises.

Thousands have been killed and over 1.5 million people have fled more than seven months of fighting between government troops, mutinous soldiers and ragtag militia forces divided by tribe.

"If we are to rapidly expand our operations and save more lives, then we need more resources, and the international community has to act now," WFP chief Ertharin Cousin said.

Fighting broke out in December, sparked by a power struggle between President Salva Kiir and his sacked deputy Riek Machar.

Top UN aid chief John Ging has called it a "man made problem, the result of a political disagreement between two powerful individuals."